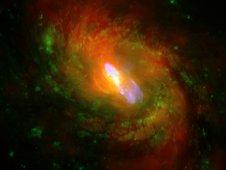 New observations from NASA's Chandra X-ray Observatory provide evidence for powerful winds blowing away from the vicinity of a supermassive black hole in a nearby galaxy. This discovery indicates that "average" supermassive black holes may play an important role in the evolution of the galaxies in which they reside.

For years, astronomers have known that a supermassive black hole grows in parallel with its host galaxy. And, it has long been suspected that material blown away from a black hole -- as opposed to the fraction of material that falls into it -- alters the evolution of its host galaxy.

A key question is whether such "black hole blowback" typically delivers enough power to have a significant impact. Powerful relativistic jets shot away from the biggest supermassive black holes in large, central galaxies in clusters like Perseus are seen to shape their host galaxies, but these are rare. What about less powerful, less focused galaxy-scale winds that should be much more common?

"We're more interested here in seeing what an "average"-sized supermassive black hole can do to its galaxy, not the few, really big ones in the biggest galaxies," said Dan Evans of the Massachusetts Institute of Technology who presented these results at the High Energy Astrophysics Division of the American Astronomical Society meeting in Kona, Hawaii.

Evans and his colleagues used Chandra for five days to observe NGC 1068, one of the nearest and brightest galaxies containing a rapidly growing supermassive black hole. This black hole is only about twice as massive as the one in the center of our Galaxy, which is considered to be a rather ordinary size.

The X-ray images and spectra obtained using Chandra's High Energy Transmission Grating Spectrometer showed that a strong wind is being driven away from the center of NGC 1068 at a rate of about a million miles per hour. This wind is likely generated as surrounding gas is accelerated and heated as it swirls toward the black hole. A portion of the gas is pulled into the black hole, but some of it is blown away. High energy X-rays produced by the gas near the black hole heat the ouflowing gas, causing it to glow at lower X-ray energies.

This study by Evans and colleagues represents the first X-ray observation that is deep enough to make a high quality map of the cone-shaped volume lit up by the black hole and its winds. By combining measurement of the velocity of the clouds with estimates of the density of the gas, Evans and his colleagues showed that each year several times the mass of the Sun is being deposited out to large distances, about 3,000 light years from the black hole. The wind may carry enough energy to heat the surrounding gas and suppress extra star formation.

"We have shown that even these middle-of-the-road black holes can pack a punch," said Evans. "I think the upshot is that these black holes are anything but ordinary."

Further studies of other nearby galaxies will examine the impact of other AGN outflows, leading to improvements in our understanding of the evolution of both galaxies and black holes.

"In the future, our own Galaxy's black hole may undergo similar activity, helping to shut down the growth of new stars in the central region of the Milky Way," said Evans.

These new results provide a key comparison to previous work performed at Georgia State University and the Catholic University of America with the Hubble Space Telescope's STIS instrument.