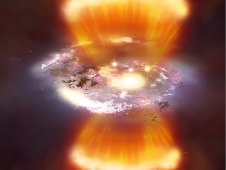 Artist concept of a galaxy inside of a glowing hydrogen "blob." Image credit: NASA/CXC/M.Weiss

The "coming of age" of galaxies and black holes has been pinpointed thanks to new data from NASA's Chandra X-ray Observatory and other telescopes. This discovery helps resolve the true nature of gigantic blobs of gas observed around very young galaxies.

About a decade ago, astronomers discovered immense reservoirs of hydrogen gas -- which they named "blobs" – while conducting surveys of young distant galaxies. The blobs are glowing brightly in optical light, but the source of immense energy required to power this glow and the nature of these objects were unclear.

A long observation from Chandra has identified the source of this energy for the first time. The X-ray data show that a significant source of power within these colossal structures is from growing supermassive black holes partially obscured by dense layers of dust and gas. The fireworks of star formation in galaxies are also seen to play an important role, thanks to Spitzer Space Telescope and ground- based observations.

"For ten years the secrets of the blobs had been buried from view, but now we've uncovered their power source," said James Geach of Durham University in the United Kingdom, who led the study. "Now we can settle some important arguments about what role they played in the original construction of galaxies and black holes."

Galaxies are believed to form when gas flows inwards under the pull of gravity and cools by emitting radiation. This process should stop when the gas is heated by radiation and outflows from galaxies and their black holes. Blobs could be a sign of this first stage, or of the second.

Based on the new data and theoretical arguments, Geach and his colleagues show that heating of gas by growing supermassive black holes and bursts of star formation, rather than cooling of gas, most likely powers the blobs. The implication is that blobs represent a stage when the galaxies and black holes are just starting to switch off their rapid growth because of these heating processes. This is a crucial stage of the evolution of galaxies and black holes - known as "feedback" - and one that astronomers have long been trying to understand.

"We're seeing signs that the galaxies and black holes inside these blobs are coming of age and are now pushing back on the infalling gas to prevent further growth," said coauthor Bret Lehmer, also of Durham. "Massive galaxies must go through a stage like this or they would form too many stars and so end up ridiculously large by the present day."

Chandra and a collection of other telescopes including Spitzer have observed 29 blobs in one large field in the sky dubbed "SSA22." These blobs, which are several hundred thousand light years across, are seen when the Universe is only about two billion years old, or roughly 15% of its current age.

In five of these blobs, the Chandra data revealed the telltale signature of growing supermassive black holes - a point-like source with luminous X-ray emission. These giant black holes are thought to reside at the centers of most galaxies today, including our own. Another three of the blobs in this field show possible evidence for such black holes. Based on further observations, including Spitzer data, the research team was able to determine that several of these galaxies are also dominated by remarkable levels of star formation.

The radiation and powerful outflows from these black holes and bursts of star formation are, according to calculations, powerful enough to light up the hydrogen gas in the blobs they inhabit. In the cases where the signatures of these black holes were not detected, the blobs are generally fainter. The authors show that black holes bright enough to power these blobs would be too dim to be detected given the length of the Chandra observations.

Besides explaining the power source of the blobs, these results help explain their future. Under the heating scenario, the gas in the blobs will not cool down to form stars but will add to the hot gas found between galaxies. SSA22 itself could evolve into a massive galaxy cluster.

"In the beginning the blobs would have fed their galaxies, but what we see now are more like leftovers," said Geach. "This means we'll have to look even further back in time to catch galaxies and black holes in the act of forming from blobs."

These results will appear in the July 10 issue of The Astrophysical Journal. NASA's Marshall Space Flight Center in Huntsville, Ala., manages the Chandra program for NASA's Science Mission Directorate in Washington. The Smithsonian Astrophysical Observatory controls Chandra's science and flight operations from Cambridge, Mass.