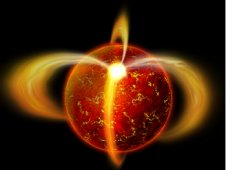 The oldest isolated pulsar ever detected in X-rays has been found with NASA's Chandra X-ray Observatory. This very old and exotic object turns out to be surprisingly active.

The pulsar, PSR J0108-1431 (J0108 for short) is about 200 million years old. Among isolated pulsars -- ones that have not been spun-up in a binary system -- it is over 10 times older than the previous record holder with an X-ray detection. At a distance of 770 light years, it is one of the nearest pulsars known.

Pulsars are born when stars that are much more massive than the Sun collapse in supernova explosions, leaving behind a small, incredibly weighty core, known as a neutron star. At birth, these neutron stars, which contain the densest material known in the Universe, are spinning rapidly, up to a hundred revolutions per second. As the rotating beams of their radiation are seen as pulses by distant observers, similar to a lighthouse beam, astronomers call them "pulsars".

Astronomers observe a gradual slowing of the rotation of the pulsars as they radiate energy away. Radio observations of J0108 show it to be one of the oldest and faintest pulsars known, spinning only slightly faster than one revolution per second.

The surprise came when a team of astronomers led by George Pavlov of Penn State University observed J0108 in X-rays with Chandra. They found that it glows much brighter in X-rays than was expected for a pulsar of such advanced years.

Some of the energy that J0108 is losing as it spins more slowly is converted into X-ray radiation. The efficiency of this process for J0108 is found to be higher than for any other known pulsar.

"This pulsar is pumping out high-energy radiation much more efficiently than its younger cousins," said Pavlov. "So, although it's clearly fading as it ages, it is still more than holding its own with the younger generations."

It's likely that two forms of X-ray emission are produced in J0108: emission from particles spiraling around magnetic fields, and emission from heated areas around the neutron star's magnetic poles. Measuring the temperature and size of these heated regions can provide valuable insight into the extraordinary properties of the neutron star surface and the process by which charged particles are accelerated by the pulsar.

The younger, bright pulsars commonly detected by radio and X-ray telescopes are not representative of the full population of objects, so observing objects like J0108 helps astronomers see a more complete range of behavior. At its advanced age, J0108 is close to the so- called “pulsar death line,” where its pulsed radiation is expected to switch off and it will become much harder, if not impossible, to observe.

"We can now explore the properties of this pulsar in a regime where no other pulsar has been detected outside the radio range," said co- author Oleg Kargaltsev of the University of Florida. "To understand the properties of ‘dying pulsars,’ it is important to study their radiation in X-rays. Our finding that a very old pulsar can be such an efficient X-ray emitter gives us hope to discover new nearby pulsars of this class via their X-ray emission."

The Chandra observations were reported by Pavlov and colleagues in the January 20, 2009, issue of The Astrophysical Journal. However, the extreme nature of J0108 was not fully apparent until a new distance to it was reported on February 6 in the PhD thesis of Adam Deller from Swinburne University in Australia. The new distance is both larger and more accurate than the distance used in the Chandra paper, showing that J0108 was brighter in X-rays than previously thought.

"Suddenly this pulsar became the record holder for its ability to make X-rays," said Pavlov, "and our result became even more interesting without us doing much extra work." The position of the pulsar seen by Chandra in X-rays in early 2007 is slightly different from the radio position observed in early 2001. This implies that the pulsar is moving at a velocity of about 440,000 miles per hour, close to a typical value for pulsars.

The detection of this motion has allowed Roberto Mignani of University College London, in collaboration with Pavlov and Kargaltsev, to possibly detect J0108 in optical light, using estimates of where it should be found in an image taken in 2000. Such a multi-wavelength study of old pulsars is critical for understanding the long-term evolution of neutron stars, such as how they cool with time, and how their powerful magnetic fields evolve.

Additional information and images about this discovery is available on the Web at: