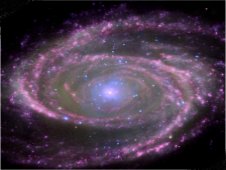 The biggest black holes may feed just like the smallest ones, according to data from NASA's Chandra X-ray Observatory and ground-based telescopes. This discovery supports the implication of Einstein's relativity theory that black holes of all sizes have similar properties, and will be useful for predicting the properties of a conjectured new class of black holes.

The conclusion comes from a large observing campaign of the spiral galaxy M81, which is about 12 million light years from Earth. In the center of M81 is a black hole that is about 70 million times more massive than the Sun, and generates energy and radiation as it pulls gas in the central region of the galaxy inwards at high speed.

Using these new observations and a detailed theoretical model, a research team compared the properties of M81's black hole with those of stellar mass black holes. The results show that either big or little, black holes indeed appear to eat similarly to each other, and produce a similar distribution of X-rays, optical and radio light.

One of the implications of Einstein's theory of General Relativity is that black holes are simple objects and only their masses and spins determine their effect on space-time. The latest research indicates that this simplicity manifests itself in spite of complicated environmental effects.

"This confirms that the feeding patterns for black holes of different sizes can be very similar," said Sera Markoff of the Astronomical Institute, University of Amsterdam in the Netherlands, who led the study. "We thought this was the case, but up until now we haven't been able to nail it."

"When we look at the data, it turns out that our model works just as well for the giant black hole in M81 as it does for the smaller guys," said Michael Nowak, a coauthor from the Massachusetts Institute of Technology. "Everything around this huge black hole looks just the same except it's almost 10 million times bigger."

Among actively feeding black holes the one in M81 is one of the dimmest, presumably because it is "underfed". It is, however, one of the brightest as seen from Earth because of its relative proximity, allowing high quality observations to be made.

"It seems like the underfed black holes are the simplest in practice, perhaps because we can see closer to the black hole," said Andrew Young of the University of Bristol in England. "They don't seem to care too much where they get their food from."

This work should be useful for predicting the properties of a third, unconfirmed class called intermediate mass black holes, with masses lying between those of stellar and supermassive black holes. Some possible members of this class have been identified, but the evidence is controversial, so specific predictions for the properties of these black holes should be very helpful.

In addition to Chandra, three radio arrays (the Giant Meterwave Radio Telescope, the Very Large Array and the Very Long Baseline Array), two millimeter telescopes (the Plateau de Bure Interferometer and the Submillimeter Array), and Lick Observatory in the optical were used to monitor M81. These observations were made simultaneously to ensure that brightness variations because of changes in feeding rates did not confuse the results. Chandra is the only X-ray satellite able to isolate the faint X-rays of the black hole from the emission of the rest of the galaxy.

This result confirms less detailed earlier work by Andrea Merloni from the Max Planck Institute for Extraterrestrial Physics (MPE) in Garching, Germany and colleagues that suggested that the basic properties of larger black holes are similar to the smaller ones. Their study, however, was not based on simultaneous, multi-wavelength observations nor the application of a detailed physical model.

These results will appear in an upcoming issue of The Astrophysical Journal. NASA's Marshall Space Flight Center, Huntsville, Ala., manages the Chandra program for the agency's Science Mission Directorate. The Smithsonian Astrophysical Observatory controls science and flight operations from the Chandra X-ray Center in Cambridge, Mass.