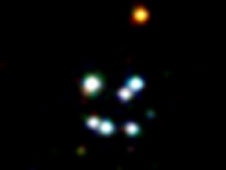 Some of the oldest objects in the Universe may still have a long way to go, according to a new study using NASA's Chandra X-ray Observatory. These new results indicate that globular clusters might be surprisingly less mature in their development than previously thought.

Globular clusters, dense bunches of up to millions of stars found in all galaxies, are among the oldest known objects in the Universe, with most estimates of their ages ranging from 9 to 13 billions of years old. As such they contain some of the first stars to form in a galaxy, and understanding their evolution is critical to understanding the evolution of galaxies.

"For many years, globular clusters have been used as wonderful natural laboratories to study the evolution and interaction of stars," said John Fregeau of Northwestern University, who conducted the study. "So, it's exciting to discover something that may be new and fundamental about the way they evolve."

Conventional wisdom is that globular clusters pass through three phases of evolution or development of their structure, corresponding to adolescence, middle age, and old age. These "ages" refer to the evolutionary state of the cluster, not the physical ages of the individual stars.

For years, it has been thought that most globular clusters are middle-aged with a few being toward the end of their evolution. However, Chandra data along with theoretical work suggest this may not be the case.

When single and double stars interact in the crowded centers of globular clusters, double stars can form that transfer mass and give off X-rays. Since such double stars are expected to mostly be formed in the middle of a globular cluster's life and then lost in old age, the relative number of X-ray sources gives clues about the stage of evolution the cluster is in.

A new study by Fregeau of 13 globular clusters in the Milky Way shows that three of them have unusually large number of X-ray sources, or X-ray binaries, suggesting the clusters are middle-aged. Previously, these globular clusters had been classified as being in old age because they had very tight concentrations of stars in their centers, another litmus test of age used by astronomers. The implication is that most globular clusters, including the other ten studied by Fregeau, are not in the middle age of their evolution, as previously thought, but are actually in adolescence.

"It's remarkable that these objects, which are thought to be some of the oldest in the Universe, may really be very immature," said Fregeau, whose paper appears in The Astrophysical Journal. "This would represent a major change in thinking about the current evolutionary status of globular clusters."

If confirmed, this result would help reconcile other observations with recent theoretical work that suggest the tightness of the central concentration of stars in the most evolved globular clusters is consistent with them being in a middle, rather than an advanced phase of evolution. Other theoretical studies have suggested it can take longer than the current age of the Universe for globular clusters to reach old age.

Besides improving the understanding of the basic evolution of globular clusters, this result has implications for understanding stellar interactions in dense environments. It also removes the need for exotic mechanisms - some involving black holes - that were thought to be needed to prevent the many middle-aged clusters from collapsing.

"Some exotic scenarios, including some of my own, have been invoked to try to make sense of the observations and save the old theory," said Fregeau. "If this result holds up, we don't have to worry about the exotic scenarios any more."