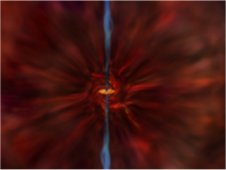 A new study using results from NASA's Chandra X-ray Observatory provides one of the best pieces of evidence yet that many supermassive black holes are spinning extremely rapidly. The whirling of these giant black holes drives powerful jets that pump huge amounts of energy into their environment and affects galaxy growth.

A team of scientists compared leading theories of jets produced by rotating supermassive black holes with Chandra data. A sampling of nine giant galaxies that exhibit large disturbances in hot gas around them showed that the central black holes in these galaxies must be spinning at near their maximum rates.

"We think these monster black holes are spinning close to the limit set by Einstein's theory of relativity, which means that they can drag material around them at close to the speed of light," said Rodrigo Nemmen, a visiting graduate student at Penn State University, and lead author of a paper on the new results, which will be presented on January 10, 2008 at the meeting of the American Astronomical Society in Austin, Texas.

"Conditions around a stationary black hole are extreme, but around a rapidly spinning one would be even worse", said Nemmen.

The research reinforces other, less direct methods previously used which have indicated that some stellar and supermassive black holes are spinning rapidly. According to Einstein's theory, a rapidly spinning black hole makes space itself rotate. This effect, coupled with gas spiraling toward the black hole, can produce a rotating, tightly wound vertical tower of magnetic field that flings a large fraction of the inflowing gas away from the vicinity of the black hole in an energetic, high-speed jet.

Computer simulations by other authors have suggested that black holes may acquire their rapid spins when galaxies merge, and through the accretion of gas from their surroundings.

"Extremely fast spin might be very common for large black holes," said co-investigator Richard Bower of Durham University in the United Kingdom. "This might help us explain the source of these incredible jets that we see stretching for enormous distances across space."

One significant consequence of powerful, black hole jets in galaxies in the centers of galaxy clusters is that they can pump enormous amounts of energy into their environments, and heat the gas around them. This heating prevents the gas from cooling, and affects the rate at which new stars form, thereby limiting the size of the central galaxy. Understanding the details of this fundamental feedback loop between supermassive black holes and the formation of the most massive galaxies remains an important goal in astrophysics.