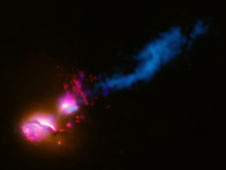 WASHINGTON - A powerful jet from a super massive black hole is blasting a nearby galaxy, according to new findings from NASA observatories. This never-before witnessed galactic violence may have a profound effect on planets in the jet's path and trigger a burst of star formation in its destructive wake.

Known as 3C321, the system contains two galaxies in orbit around each other. Data from NASA's Chandra X-ray Observatory show both galaxies contain super massive black holes at their centers, but the larger galaxy has a jet emanating from the vicinity of its black hole. The smaller galaxy apparently has swung into the path of this jet.

This "death star" galaxy was discovered through the combined efforts of both space and ground-based telescopes. NASA's Chandra X-ray Observatory, Hubble Space Telescope, and Spitzer Space Telescope were part of the effort. The Very Large Array telescope, Socorro, N.M., and the Multi-Element Radio Linked Interferometer Network (MERLIN) telescopes in the United Kingdom also were needed for the finding.

"We've seen many jets produced by black holes, but this is the first time we've seen one punch into another galaxy like we're seeing here," said Dan Evans, a scientist at the Harvard-Smithsonian Center for Astrophysics and leader of the study. "This jet could be causing all sorts of problems for the smaller galaxy it is pummeling."

Jets from super massive black holes produce high amounts of radiation, especially high-energy X-rays and gamma-rays, which can be lethal in large quantities. The combined effects of this radiation and particles traveling at almost the speed of light could severely damage the atmospheres of planets lying in the path of the jet. For example, protective layers of ozone in the upper atmosphere of planets could be destroyed.

Jets produced by super massive black holes transport enormous amounts of energy far from black holes and enable them to affect matter on scales vastly larger than the size of the black hole. Learning more about jets is a key goal for astrophysical research.

"We see jets all over the universe, but we're still struggling to understand some of their basic properties," said co-investigator Martin Hardcastle of the University of Hertfordshire in the United Kingdom. "This system of 3C321 gives us a chance to learn how they're affected when they slam into something like a galaxy and what they do after that."

The effect of the jet on the companion galaxy is likely to be substantial, because the galaxies in 3C321 are extremely close at a distance of only about 20,000 light years apart. They lie approximately the same distance as Earth is from the center of the Milky Way galaxy.

A bright spot in the Very Large Array and MERLIN images shows where the jet has struck the side of the galaxy, dissipating some of the jet's energy. The collision disrupted and deflected the jet.

Another unique aspect of the discovery in 3C321 is how relatively short-lived this event is on a cosmic time scale. Features seen in the Very Large Array and Chandra images indicate that the jet began impacting the galaxy about one million years ago, a small fraction of the system's lifetime. This means such an alignment is quite rare in the nearby universe, making 3C321 an important opportunity to study such a phenomenon.

It is possible the event is not all bad news for the galaxy being struck by the jet. The massive influx of energy and radiation from the jet could induce the formation of large numbers of stars and planets after its initial wake of destruction is complete.

The results from Evans and his colleagues will appear in The Astrophysical Journal. NASA's Marshall Space Flight Center, Huntsville, Ala., manages the Chandra program for the agency's Science Mission Directorate. The Smithsonian Astrophysical Observatory controls science and flight operations from the Chandra X-ray Center in Cambridge, Mass.