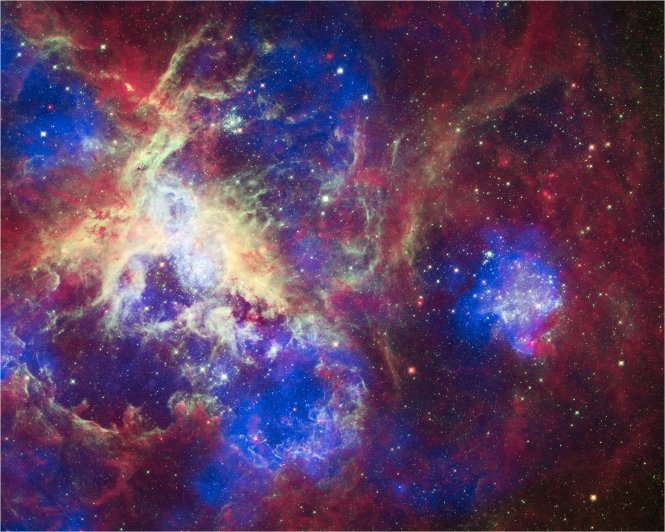 To celebrate its 22nd anniversary in orbit, the Hubble Space Telescope has released a dramatic new image of the star-forming region 30 Doradus, also known as the Tarantula Nebula because its glowing filaments resemble spider legs. A new image from all three of NASA's Great Observatories - Chandra, Hubble, and Spitzer - has also been created to mark the event.

30 Doradus is located in the neighboring galaxy called the Large Magellanic Cloud, and is one of the largest star-forming regions located close to the Milky Way . At the center of 30 Doradus, thousands of massive stars are blowing off material and producing intense radiation along with powerful winds. The Chandra X-ray Observatory detects gas that has been heated to millions of degrees by these stellar winds and also by supernova explosions. These X-rays, colored blue in this composite image, come from shock fronts -- similar to sonic booms -- formed by this high-energy stellar activity.

The Hubble data in the composite image, colored green, reveals the light from these massive stars along with different stages of star birth including embryonic stars a few thousand years old still wrapped in cocoons of dark gas. Infrared emission from Spitzer, seen in red, shows cooler gas and dust that have giant bubbles carved into them. These bubbles are sculpted by the same searing radiation and strong winds that comes from the massive stars at the center of 30 Doradus.