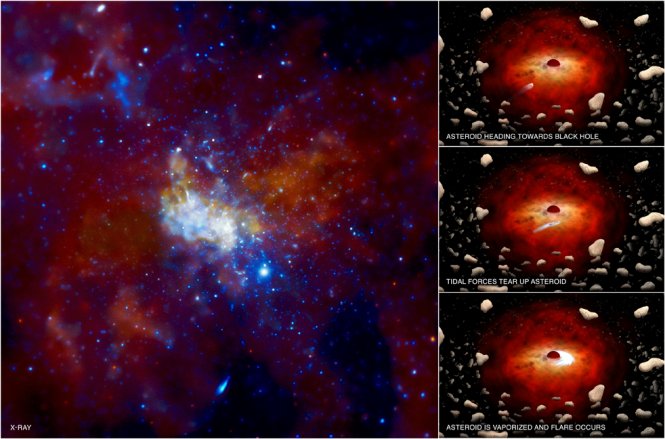 This image from NASA's Chandra X-ray Observatory shows the center of our Galaxy, with a supermassive black hole known as Sagittarius A* (Sgr A* for short) in the center. Using intermittent observations over several years, Chandra has detected X-ray flares about once a day from Sgr A*. The flares have also been seen in infrared data from ESO's Very Large Telescope in Chile.

A new study provides a possible explanation for the mysterious flares. The suggestion is that there is a cloud around Sgr A* containing hundreds of trillions of asteroids and comets , which have been stripped from their parent stars. The panel on the left is an image containing nearly a million seconds of Chandra observing of the region around the black hole, with red representing low-energy X-rays, green as medium-energy X-rays, and blue being the highest.

An asteroid that undergoes a close encounter with another object, such as a star or planet, can be thrown into an orbit headed towards Sgr A*, as seen in a series of artist's illustrations beginning with the top-right panel. If the asteroid passes within about 100 million miles of the black hole, roughly the distance between the Earth and the Sun, it would be torn into pieces by the tidal forces from the black hole (middle-right panel).

These fragments would then be vaporized by friction as they pass through the hot, thin gas flowing onto Sgr A*, similar to a meteor heating up and glowing as it falls through Earth's atmosphere. A flare is produced (bottom-right panel) and eventually the remains of the asteroid are swallowed by the black hole.

Another solar system analogy for this type of event has recently been reported. About once every three days a comet is destroyed when it flies into the hot atmosphere of the Sun. So, despite the significant differences in the two environments, the destruction rate of comets and asteroids by the Sun and Sgr A* may be similar.

Very long observations of Sgr A* will be made with Chandra later in 2012 that will give valuable new information about the frequency and brightness of flares and should help to test the model proposed here to explain them. This work has the potential to understand the ability of asteroids and planets to form in the harsh environment of Sgr A*.