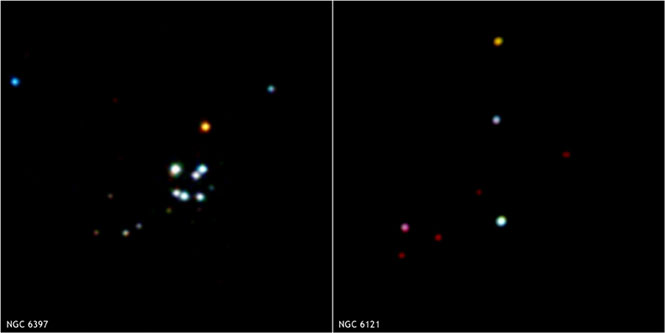 These are Chandra X-ray Observatory images of the centers of two globular clusters, NGC 6397 and NGC 6121, located in the Milky Way galaxy. They are part of a new study that shows globular clusters might be surprisingly less mature in their development than previously thought.

Globular clusters are dense bunches of up to millions of stars that are among the oldest known objects in the Universe. Conventional wisdom is that they pass through three phases of evolution or development of heir structure, corresponding to adolescence, middle age, and old age. These "ages" refer to the evolutionary state of the cluster, not the physical ages of the individual stars.

The number of double stars -- and bright X-ray sources -- in a globular cluster also depends on the encounter rate near the center of the cluster. NGC 6397 has a lower encounter rate than NGC 6121, so it should have fewer X-ray sources, assuming that it is in the same stage of evolution. Instead, NGC 6397 has a clear surplus of X-ray sources, suggesting that it is in a more advanced stage of evolution (middle age) than NGC 6121, which appears to still be in adolescence.