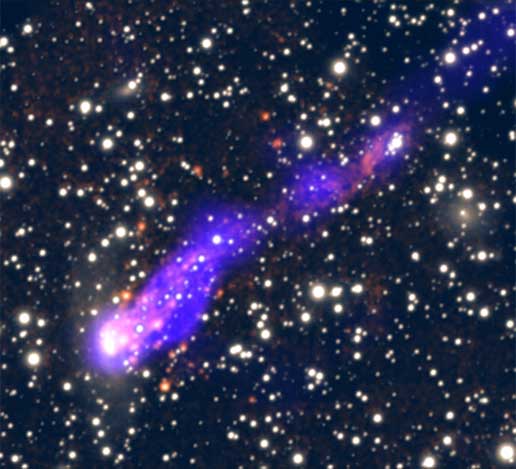 This composite image of X-ray and optical light shows a tail that has been created as a galaxy plunges into a cluster, shedding material and forming stars behind it. In this image, X-rays from NASA’s Chandra X-ray Observatory (blue) are seen to extend for over 200,000 light years behind the galaxy called ESO 137-001. Emission from hydrogen light (red), known to astronomers as "H-alpha", and the continuum of optical light (white) were gathered from the Southern Astrophysical Research telescope (SOAR) in Chile.

The tail was created as gas was stripped from ESO 137-001 as it descends toward the center of Abell 3627, a giant cluster of galaxies. The tail in X-rays reveals multimillion-degree gas from the cluster and the H-alpha radiation, which stretches for about 130,000 light years, is much cooler gas. Evidence for star formation in this tail includes 29 regions of ionized hydrogen that are glowing in H-alpha, from the light of newly formed stars. These regions are all downstream of the galaxy, located in or near the tail. The researchers believe the stars formed in the tail within the last 10 million years or so. Two Chandra X-ray sources near these regions represent extra evidence for star formation activity.

ESO 137-001 is seen at the head of the tail near the bottom left corner of the image. Most of the stars in the image are foreground objects located in the Milky Way galaxy, because the line-of-sight to the distant galaxy cluster is close to the plane of our galaxy. Several galaxies in the cluster are visible in the image.