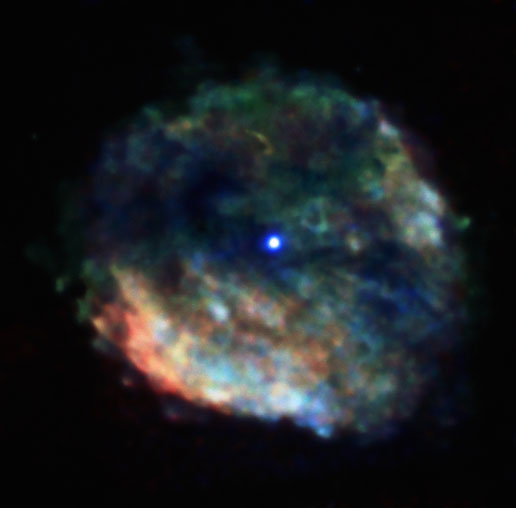 When stars are more massive than about 8 times the Sun, they end their lives in a spectacular explosion called a supernova. The outer layers of the star are hurtled out into space at thousands of miles an hour, leaving a debris field of gas and dust. Where the star once was located, a small, incredibly dense object called a neutron star is often found. While only 10 miles or so across, the tightly packed neutrons in such a star contain more mass than the entire Sun.

A new X-ray image shows the 2,000 year-old-remnant of such a cosmic explosion, known as RCW 103, which occurred about 10,000 light years from Earth. In Chandra's image, the colors of red, green, and blue are mapped to low, medium, and high-energy X-rays. At the center, the bright blue dot is likely the neutron star that astronomers believe formed when the star exploded. For several years astronomers have struggled to understand the behavior of the this object, which exhibits unusually large variations in its X-ray emission over a period of years.

New evidence from Chandra implies that the neutron star near the center is rotating once every 6.7 hours, confirming recent work from XMM-Newton. This is much slower than a neutron star of its age should be spinning. One possible solution to this mystery is that the massive progenitor star to RCW 103 may not have exploded in isolation. Rather, a low-mass star that is too dim to see directly may be orbiting around the neutron star. Gas flowing from this unseen neighbor onto the neutron star might be powering its X-ray emission, and the interaction of the magnetic field of the two stars could have caused the neutron star to slow its rotation.