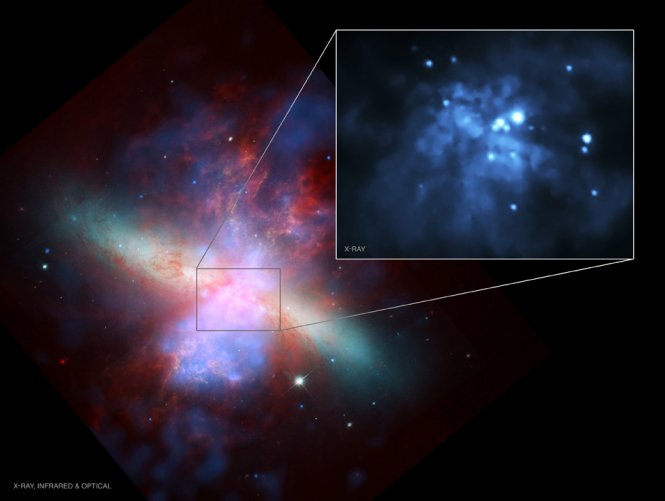 This composite image of the nearby starburst galaxy M82 shows Chandra X-ray Observatory data in blue, optical data from the Hubble Space Telescope in green and orange, and infrared data from the Spitzer Space Telescope in red. The pullout is a Chandra image that shows the central region of the galaxy and contains two bright X-ray sources -- identified in a labeled version -- of special interest.

New studies with Chandra and ESA's XMM-Newton show that these two sources may be intermediate-mass black holes, with masses in between those of the stellar-mass and supermassive variety. These "survivor" black holes avoided falling into the center of the galaxy and could be examples of the seeds required for the growth of supermassive black holes in galaxies, including the one in the Milky Way.

This is the first case where good evidence for more than one mid-sized black hole exists in a single galaxy. The evidence comes from how their X-ray emission varies over time and analysis of their X-ray brightness and spectra, i.e., the distribution of X-rays with energy.

One of the black holes is located at a projected distance of 290 light years from the center of M82 (labeled with an "x") and its mass is estimated to be between 12,000 and 43,000 times the mass of the Sun. At this close distance, if the black hole was born at the same time as the galaxy and its mass was more than about 30,000 solar masses, it likely would have been pulled into the center of the galaxy. That is, it may have just escaped falling into the supermassive black hole that is presumably located in the center of M82. The second black hole is located 600 light years in projection away from the center of M82. The best model for this M82 black hole has a mass between 200 and 800 times that of the Sun, and tilted at an angle between 60 and 80 degrees, meaning that the disk is viewed almost side-on. However, because of relativistic effects for a rapidly spinning black hole with this mass, a disk viewed at a high inclination is almost as bright as one viewed at a low inclination (i.e., face-on).

These results are interesting because they may help address the mystery of how supermassive black holes in the centers of galaxies form. M82 is located about 12 million light years from Earth and is the nearest place to us where the conditions are similar to those in the early Universe, with lots of stars forming.

Multiple observations of M82 have been made with Chandra beginning soon after launch. The Chandra data shown here were not used in the new research because the X-ray sources are so bright that some distortion is introduced into the X-ray spectra. To combat this, the pointing of Chandra is changed so that images of the sources are deliberately blurred, producing fewer counts in each pixel.