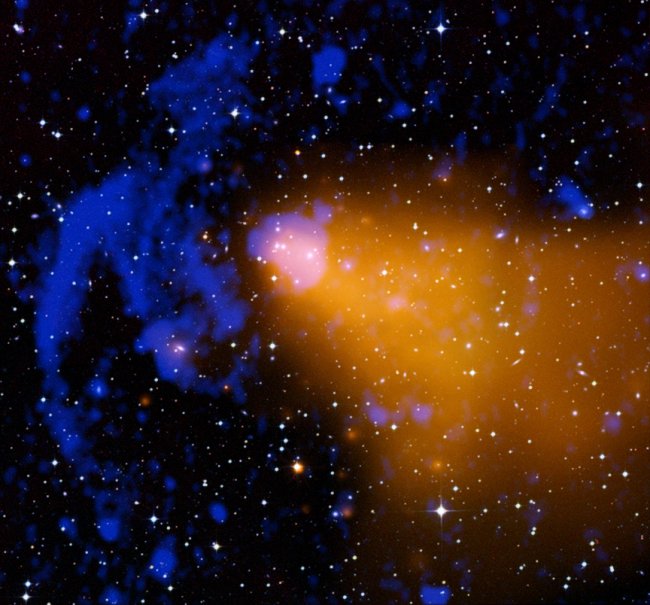 Two different teams have reported using Chandra observations of galaxy clusters to study the properties of gravity on cosmic scales and test Einstein's theory of General Relativity. Such studies are crucial for understanding the evolution of the universe, both in the past and the future, and for probing the nature of dark energy, one of the biggest mysteries in science.

This composite image of the galaxy cluster Abell 3376 shows X-ray data from the Chandra X-ray Observatory and the ROSAT telescope in gold, an optical image from the Digitized Sky Survey in red, green and blue, and a radio image from the VLA in blue. The "bullet-like" appearance of the X-ray data is caused by a merger, as material flows into the galaxy cluster from the right side. The giant radio arcs on the left side of the image may be caused by shock waves generated by this merger.

The growth of galaxy clusters like Abell 3376 is influenced by the expansion rate of the Universe -- controlled by the competing effects of dark matter and dark energy -- and by the properties of gravity over large scales. By contrast, observations of supernovas or the large-scale distribution of galaxies, which measure cosmic distances, depend only on the expansion rate of the universe and are not sensitive to the properties of gravity.

In the first of the new studies of gravity, an alternative theory to General Relativity called "f(R) gravity" was tested. In this theory, the acceleration of the expansion of the universe does not come from an exotic form of energy but from a modification of the gravitational force. Mass estimates of galaxy clusters in the local universe were compared with model predictions for f(R) gravity. Data from geometrical studies, such as supernova work, were also used. Using this comparison between theory and observation, no evidence was found that gravity is different from General Relativity on scales larger than 130 million light years. This limit corresponds to a hundred-fold improvement on the bounds of the modified gravitational force's range that can be set without using the cluster data.

In the second study, a comparison was made between X-ray observations of how rapidly galaxy clusters have grown over cosmic time to the predictions of General Relativity. Once again, data from geometrical studies such as distances to supernovas and galaxy clusters were incorporated. Nearly complete agreement was seen between observation and theory, arguing against any alternative gravity models with a different rate of growth. In particular "DGP gravity" (named after its inventors Gia Dvali, Gregory Gabadadze, and Massimo Porrati) predicts a slower rate of cluster growth than General Relativity, because gravity is weakened on large scales as it leaks into an extra dimension. Like f(R) gravity, the DGP model is designed to avoid the need for an exotic form of energy causing cosmic acceleration.

Chandra observations of galaxy clusters have previously been used to show that dark energy has stifled the growth of these massive structures over the last 5 billion years and to provide independent evidence for the existence of dark energy by offering a different way to measure cosmic distances.