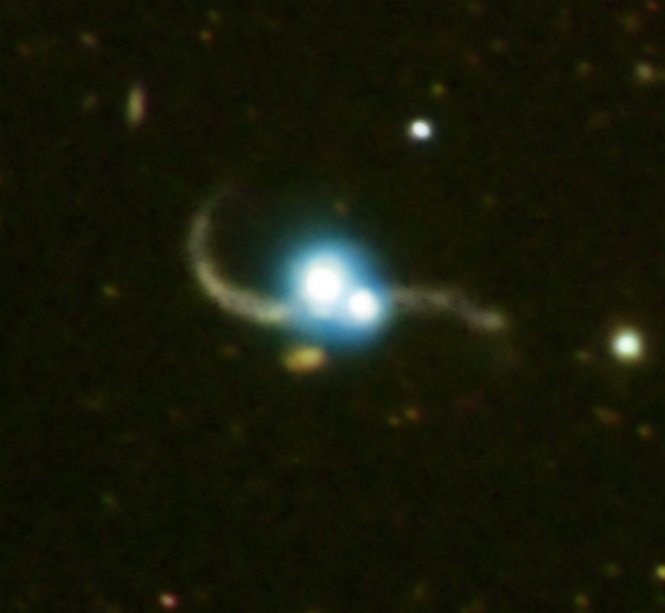 This composite image shows the effects of two galaxies caught in the act of merging. A Chandra X-ray Observatory image shows a pair of quasars in blue, located about 4.6 billion light years away, but separated on the sky by only about 70 thousand light years. These bright sources, collectively called SDSS J1254+0846, are powered by material falling onto supermassive black holes. An optical image from the Baade-Magellan telescope in Chile, in yellow, shows tidal tails -- gravitational-stripped streamers of stars and gas -- fanning out from the two colliding galaxies.

This represents the first time a luminous pair of quasars has been clearly seen in an ongoing galaxy merger. "Quasars are the most luminous compact objects in the Universe, and though about a million of them are now known, it's incredibly hard work to find two quasars side by side," said Paul Green, from the Harvard-Smithsonian Center for Astrophysics in Cambridge, MA, who led the study.

This pair of quasars was first detected by the Sloan Digital Sky Survey, a large-scale astronomical survey of galaxies and quasars. They were observed with the Magellan telescope to determine whether the quasars were close enough to show clear signs of interactions between their host galaxies. "The tidal tails fanning out from the galaxies that we see in the optical image are a sure sign, the litmus test of an ongoing galaxy merger," said Green.

This result represents strong evidence for the prediction that a pair of quasars would be triggered during a merger. The galaxy disks both appear to be nearly face-on to Earth, which may explain why the X-rays from Chandra show no signs of absorption by intervening gas or dust.