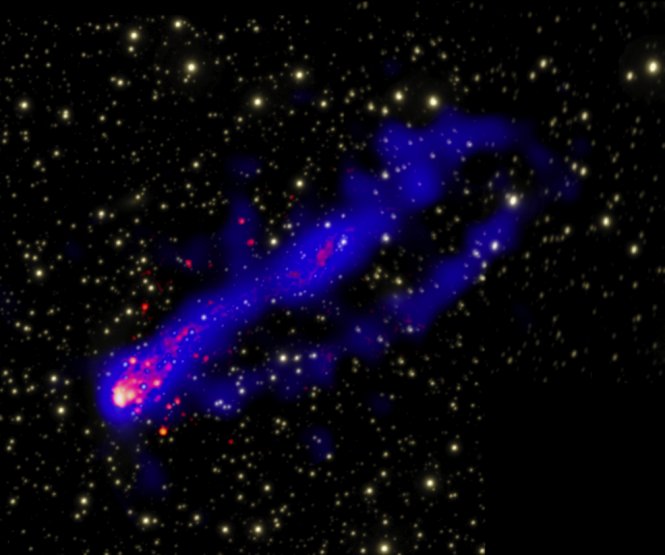 Two spectacular tails of X-ray emission have been seen trailing behind a galaxy using the Chandra X-ray Observatory. A composite mage of the galaxy cluster Abell 3627 shows X-rays from Chandra in blue, optical emission in yellow and emission from hydrogen light -- known to astronomers as "H-alpha" -- in red. The optical and H-alpha data were obtained with the Southern Astrophysical Research (SOAR) Telescope in Chile.

At the front of the tail is the galaxy ESO 137-001. The brighter of the two tails has been seen before and extends for about 260,000 light years. The detection of the second, fainter tail, however, was a surprise to the scientists.

The X-ray tails were created when cool gas from ESO 137-001 (with a temperature of about ten degrees above absolute zero) was stripped by hot gas (about 100 million degrees) as it travels towards the center of the galaxy cluster Abell 3627. What astronomers observe with Chandra is essentially the evaporation of the cold gas, which glows at a temperature of about 10 million degrees. Evidence of gas with temperatures between 100 and 1,000 degrees Kelvin in the tail was also found with the Spitzer Space Telescope.

Galaxy clusters are collections of hundreds or even thousands of galaxies held together by gravity that are enveloped in hot gas. The two-pronged tail in this system may have formed because gas has been stripped from the two major spiral arms in ESO 137-001. The stripping of gas is thought to have a significant effect on galaxy evolution, removing cold gas from the galaxy, shutting down the formation of new stars in the galaxy, and changing the appearance of inner spiral arms and bulges because of the effects of star formation.

The H-alpha data shows evidence for star formation in the tails -- the first unambiguous evidence that star formation can occur when cold gas is stripped out of galaxies as they fall through clusters. The Chandra data also reveal an excess of luminous X-ray point sources around the X-ray tails. Some of them are considered to be young massive binary stars associated with nearby young star clusters, giving more evidence of star formation in the tails. The implication is that a large portion of stars between cluster galaxies can be formed in situ.

The X-ray data also reveal that there is little change in temperature of the hot gas in the tails, and also little change in width of the tails with distance from ESO 137-001. Both of these features present challenges to scientists doing simulations of the galaxy tails.