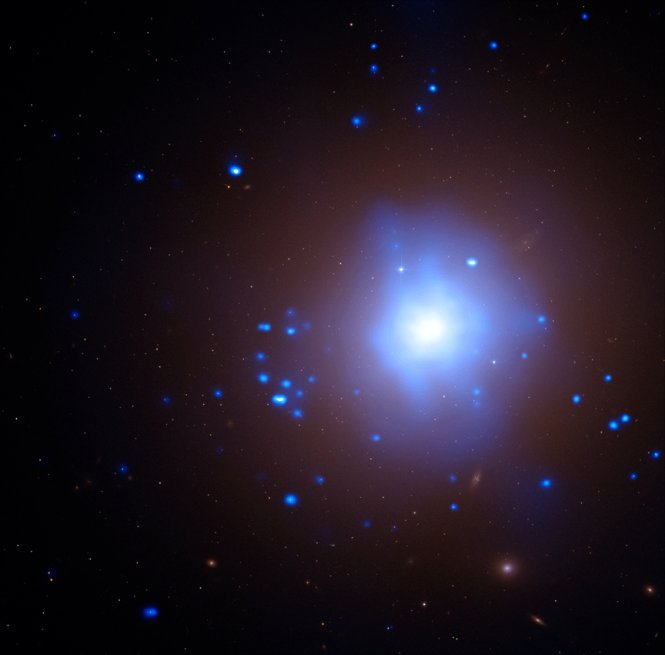 Evidence from NASA's Chandra X-ray Observatory and the Magellan telescopes suggest a star has been torn apart by an intermediate-mass black hole in a globular cluster. In this image, X-rays from Chandra are shown in blue and are overlaid on an optical image from the Hubble Space Telescope. The Chandra observations show that this object is a so-called ultraluminous X-ray source (ULX). An unusual class of objects, ULXs emit more X-rays than stars, but less than quasars. Their exact nature has remained a mystery, but one suggestion is that some ULXs are black holes with masses between about a hundred and a thousands times that of the Sun.

Data optical light obtained with the Magellan I and II telescopes in Las Campanas, Chile, also provides intriguing information about this object, which is found in the elliptical galaxy NGC 1399 in the Fornax cluster. The spectrum reveals emission from oxygen and nitrogen but no hydrogen, a rare set of signals from within globular clusters. The combination of this unusual X-ray and optical emission makes this a remarkable object. This leads the researchers to suspect that a white dwarf star strayed too close to the intermediate-mass black hole and was ripped apart by tidal forces.

Another interesting aspect to this object is that it is found within a globular cluster, a very old, very tight grouping of stars. Astronomers have long suspected globular clusters contained intermediate-mass black holes, but there has been no conclusive evidence of their existence there to date. If confirmed, this finding would represent the first such substantiation.