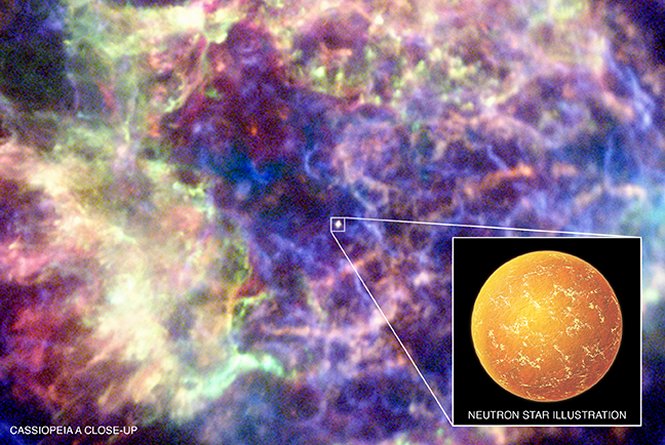 This Chandra X-ray Observatory image shows the central region of the supernova remnant Cassiopeia A (Cas A, for short) the remains of a massive star that exploded in our galaxy. Evidence for a thin carbon atmosphere on a neutron star at the center of Cas A has been found.

Besides resolving a ten-year-old mystery about the nature of this object, this result provides a vivid demonstration of the extreme nature of neutron stars. An artist's impression of the carbon-cloaked neutron star is also shown.

Discovered in Chandra's "First Light" image obtained in 1999, the point-like X-ray source at the center of Cas A was presumed to be a neutron star, the typical remnant of an exploded star, but it surprisingly did not show any evidence for X-ray or radio pulsations. By applying a model of a neutron star with a carbon atmosphere to this object, it was found that the region emitting X-rays would uniformly cover a typical neutron star. This would explain the lack of X-ray pulsations because this neutron star would be unlikely to display any changes in its intensity as it rotates. The result also provides evidence against the possibility that the collapsed star contains strange quark matter.

The properties of this carbon atmosphere are remarkable. It is only about four inches thick, has a density similar to diamond and a pressure more than ten times that found at the center of the Earth. As with the Earth's atmosphere, the extent of an atmosphere on a neutron star is proportional to the atmospheric temperature and inversely proportional to the surface gravity. The temperature is estimated to be almost two million degrees, much hotter than the Earth's atmosphere. However, the surface gravity on Cas A is 100 billion times stronger than on Earth, resulting in an incredibly thin atmosphere.

> View larger images
› Back To Top