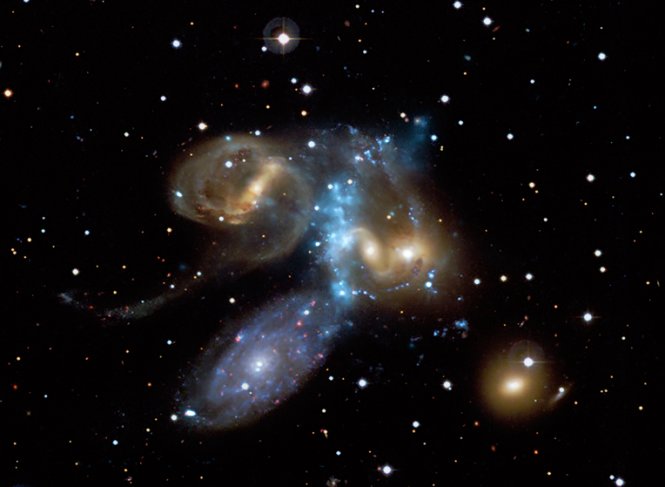 This beautiful image gives a new look at Stephan's Quintet, a compact group of galaxies discovered about 130 years ago and located about 280 million light years from Earth. The curved, light blue ridge running down the center of the image shows X-ray data from the Chandra X-ray Observatory. Four of the galaxies in the group are visible in the optical image (yellow, red, white and blue) from the Canada-France- Hawaii Telescope. A labeled version identifies these galaxies (NGC 7317, NGC 7318a, NGC 7318b and NGC 7319) as well as a prominent foreground galaxy (NGC 7320) that is not a member of the group. The galaxy NGC 7318b is passing through the core of galaxies at almost 2 million miles per hour, and is thought to be causing the ridge of X- ray emission by generating a shock wave that heats the gas.

Additional heating by supernova explosions and stellar winds has also probably taken place in Stephan's Quintet. A larger halo of X-ray emission -- not shown here -- detected by ESA's XMM-Newton could be evidence of shock-heating by previous collisions between galaxies in this group. Some of the X-ray emission is likely also caused by binary systems containing massive stars that are losing material to neutron stars or black holes.

Stephan's Quintet provides a rare opportunity to observe a galaxy group in the process of evolving from an X-ray faint system dominated by spiral galaxies to a more developed system dominated by elliptical galaxies and bright X-ray emission. Being able to witness the dramatic effect of collisions in causing this evolution is important for increasing our understanding of the origins of the hot, X-ray bright halos of gas in groups of galaxies.

Stephan's Quintet shows an additional sign of complex interactions in the past, notably the long tails visible in the optical image. These features were probably caused by one or more passages through the galaxy group by NGC 7317.