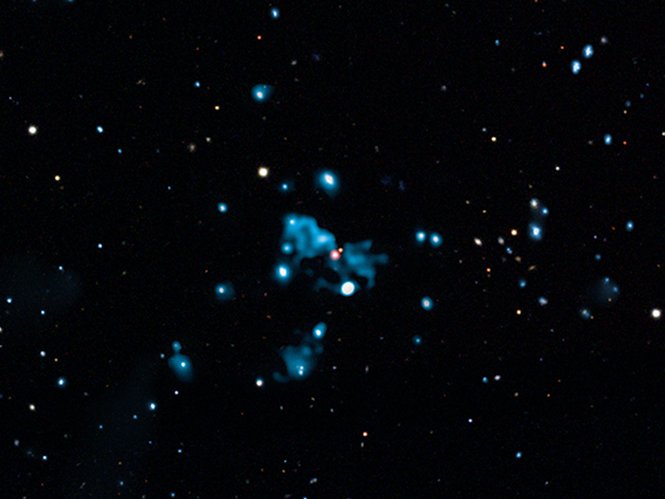 This is a composite image showing a small region of the Chandra Deep Field North. Shown in blue is a deep image from the Chandra X-ray Observatory and in red is an image from the Multi-Element Radio Linked Interferometer Network (MERLIN) an array of radio telescopes based in Great Britain. An optical image from the Sloan Digital Sky Survey (SDSS) is shown in white, yellow and orange.

The diffuse blue object near the center of the image is believed to be a cosmic "ghost" generated by a huge eruption from a supermassive black hole in a distant galaxy. This X-ray ghost, a.k.a. HDF 130, remains after powerful radio waves from particles traveling away from the black hole at almost the speed of light, have died off. As the electrons radiate away their energy they produce X-rays by interacting with the pervasive sea of photons remaining from the Big Bang - the cosmic background radiation. Collisions between these electrons and the background photons can impart enough energy to the photons to boost them into the X-ray energy band. The cigar-like shape of HDF 130 and its length of about 2.2 million light years are consistent with the properties of radio jets.

HDF 130 is over 10 billion light years away and existed at a time 3 billion years after the Big Bang, when galaxies and black holes were forming at a high rate. Near the center of the X-ray ghost is a radio point source indicating the presence of a growing supermassive black hole. This source corresponds to the location of a massive elliptical galaxy visible in very deep optical images (not shown here). The nearby red object in the SDSS image located immediately above and to the right of the radio source is another, unrelated galaxy located closer to the Earth.