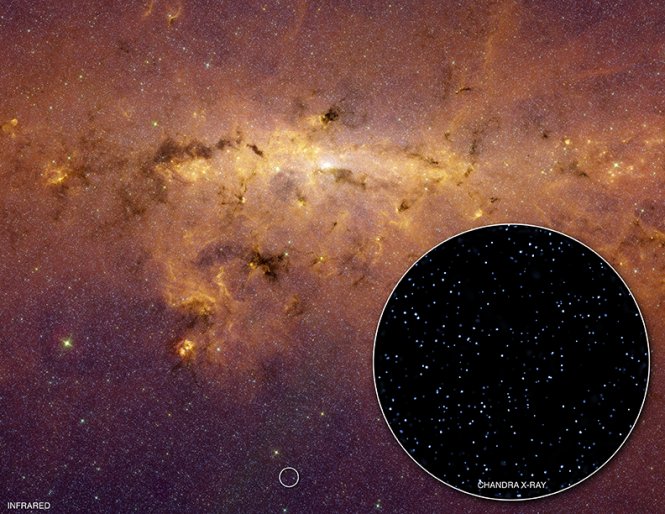 An extremely deep Chandra X-ray Observatory image of a region near the center of our galaxy has resolved a long-standing mystery about an X-ray glow along the plane of the galaxy. The glow in the region covered by the Chandra image was discovered to be caused by hundreds of point-like X-ray sources, implying that the glow along the plane of the galaxy is due to millions of such sources.

This image shows an infrared view from the Spitzer Space Telescope of the central region of the Milky Way, with a pullout showing a Chandra image of a region located only 1.4 degrees away from the center of the galaxy.

One interpretation of the galactic X-ray ridge is that it is emission from 100-million-degree gas. This interpretation is problematic because the disk of the galaxy is not massive enough to confine such hot gas, which should flow away in a wind. Replenishing the gas would then be a problem, since plausible sources of energy such as supernovas are not nearly powerful enough.

A very deep Chandra observation, lasting for about 12 days, was used to study the nature of this ridge emission. The field was chosen to be close enough to the galactic plane so that the ridge emission was strong, but in a region with relatively little absorption from dust and gas to maximize the number of sources that might be detected. A total of 473 sources were detected in an area of the sky only about 3 percent of the size of the full moon -- one of the highest densities of X-ray sources ever seen in our galaxy.

It was found that more than 80 percent of the seemingly diffuse ridge of X-ray emission was resolved into individual sources. These are believed to be mostly white dwarfs pulling matter from companion stars, and double stars with strong magnetic activity that are producing X-ray outbursts or flares that are similar to, but more powerful than, the flares seen on the sun. These stars are unrelated to the large-scale structures seen toward the center of the Spitzer image, which are probably caused by young massive stars.

The paper reporting these results appears in the April 30 issue of Nature magazine. This work was led by Mikhail Revnivtsev from the Excellence Cluster Universe, Technical University Munich in Garching, Germany; and from the Space Research Institute in Moscow, Russia. The co-authors were Sergey Sasanov of the Space Research Institute in Moscow; Eugene Churazov and Rashid Sunyaev of the Max Planck Institute for Astrophysics in Garching; and William Forman and Alexey Vikhlinin from the Harvard-Smithsonian Center for Astrophysics in Cambridge, Mass.

The images and other information can be found at:


More About the Spitzer Space Telescope
NASA's Spitzer Space Telescope was launched to space in 2003 to study the cosmos by detecting the infrared energy, or heat, radiated by objects in space -- including the first detection of light from extra-solar planetary bodies. Spitzer is operated and managed by NASA's Jet Propulsion Laboratory and the Spitzer Science Center at the California Institute of Technology in Pasadena, Calif. Spitzer and Chandra are two of NASA's Great Observatories, four orbiting telescopes and imagers studying the Universe in a different kind of light. The other two, the Hubble Space Telescope and the Compton Gamma-ray Observatory, study visible light and gamma-rays, respectively.