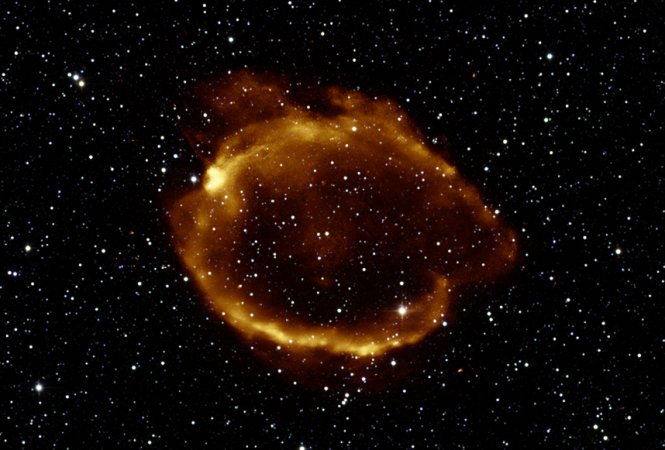 G299.2-2.9 is an intriguing supernova remnant found about 16,000 light years away in the Milky Way galaxy. Evidence points to G299.2-2.9 being the remains of a Type Ia supernova, where a white dwarf has grown sufficiently massive to cause a thermonuclear explosion. Because it is older than most supernova remnants caused by these explosions, at an age of about 4,500 years, G299.2-2.9 provides astronomers with an excellent opportunity to study how these objects evolve over time. It also provides a probe of the Type Ia supernova explosion that produced this structure.

This composite image shows G299.2-2.9 in X-ray light from Chandra and the ROSAT satellite, in orange, that has been overlaid on an infrared image from the Two Micron All-Sky Survey, or 2MASS. The faint X-ray emission from the inner region reveals relatively large amounts of iron and silicon, as expected for a remnant of a Type Ia supernova. The outer shell of the remnant is complex, with at least a double shell structure. Typically, such a complex outer shell is associated with a star that has exploded into space where gas and dust are not uniformly distributed.

Since most theories to explain Type Ia supernovas assume they go off in a uniform environment, detailed studies of this complicated outer shell should help astronomers improve their understanding of the environments where these explosions occur. It is very important to understand the details of Type Ia explosions because astronomers use them as cosmic mile markers to measure the accelerated expansion of the universe and study dark energy. The discovery of this accelerated expansion in the late 1990s led to the recent award of the Nobel Prize in Physics.