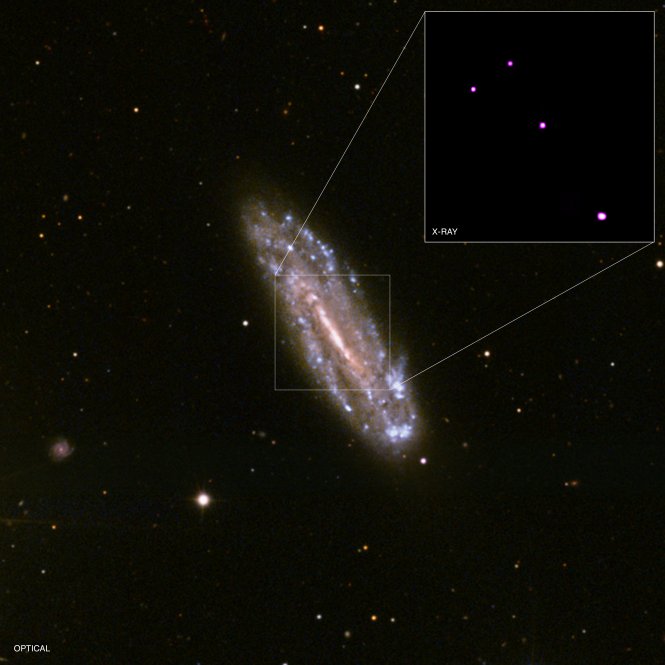 The black hole is located in the middle of the spiral galaxy NGC 4178, shown in this image from the Sloan Digital Sky Survey. The inset shows an X-ray source at the position of the black hole, in the center of a Chandra image. An analysis of the Chandra data, along with infrared data from NASA's Spitzer Space Telescope and radio data from the NSF's Very Large Array suggests that the black hole is near the extreme low-mass end of the supermassive black hole range.

These results were published in the July 1, 2012 issue of The Astrophysical Journal by Nathan Secrest, from George Mason University in Fairfax, Virginia, and collaborators.

The properties of the X-ray source, including its brightness and spectrum - the amount of X-rays at different wavelengths - and its brightness at infrared wavelengths, suggest that a black hole in the center of NGC 4178 is rapidly pulling in material from its surroundings. The same data also suggest that light generated by this infalling material is heavily absorbed by gas and dust surrounding the black hole.

NGC 4178 is a spiral galaxy located about 55 million light years from Earth. It does not contain a bright central concentration, or bulge, of stars in its center. Besides NGC 4178, four other galaxies without bulges are currently thought to contain supermassive black holes. Of these four black holes, two have masses that may be close to that of the black hole in NGC 4178. XMM-Newton observations of an X-ray source discovered by Chandra in the center of the galaxy NGC 4561 indicate that the mass of this black hole is greater than 20,000 times the mass of the sun, but the mass could be substantially higher if the black hole is pulling in material slowly, causing it to generate less X-ray emission. A paper describing these results was published in the October 1st, 2012 issue of The Astrophysical Journal by Araya Salvo and collaborators.

The mass of the black hole in the galaxy NGC 4395 is estimated to be about 360,000 times the mass of the sun, as published by Peterson and collaborators in the October 20, 2005 issue of the Astrophysical Journal.