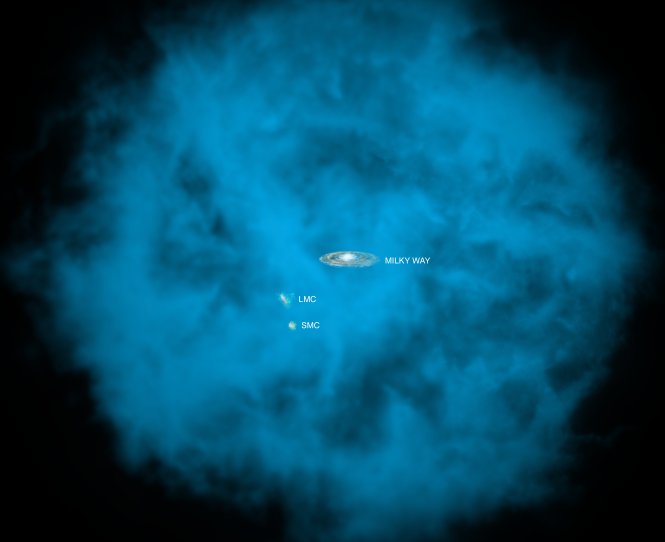 This artist's illustration shows an enormous halo of hot gas (in blue) around the Milky Way galaxy. Also shown, to the lower left of the Milky Way, are the Small and Large Magellanic Clouds, two small neighboring galaxies. The halo of gas is shown with a radius of about 300,000 light years, although it may extend significantly further.

Data from NASA's Chandra X-ray Observatory was used to estimate [link to press release] that the mass of the halo is comparable to the mass of all the stars in the Milky Way galaxy. If the size and mass of this gas halo is confirmed, it could be the solution to the "missing-baryon" problem for the Galaxy.

In a recent study, a team of five astronomers used data from Chandra, ESA's XMM-Newton, and Japan's Suzaku satellite to set limits on the temperature, extent and mass of the hot gas halo. Chandra observed eight bright X-ray sources located far beyond the Galaxy at distances of hundreds of millions of light years. The data revealed that X-rays from these distant sources are selectively absorbed by oxygen ions in the vicinity of the Galaxy. The nature of the absorption allowed the scientists to determine that the temperature of the absorbing halo is between 1 million and 2.5 million Kelvins.

Other studies have shown that the Milky Way and other galaxies are embedded in warm gas, with temperatures between 100,000 and one million degrees, and there have been indications that a hotter component with a temperature greater than a million degrees is also present. This new research provides evidence that the mass in the hot gas halo enveloping the Milky is much greater than that of the warm gas.