Grow Text SizeShrink Text Size
Remnant of an Explosion With a Powerful Kick? 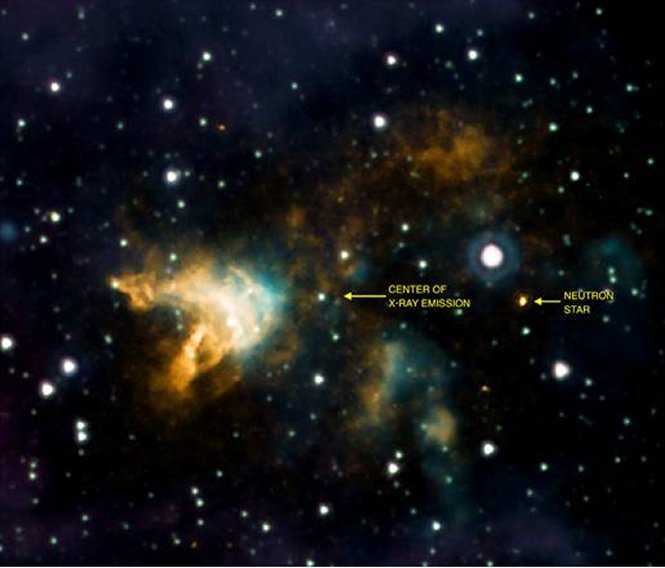 Vital clues about the devastating ends to the lives of massive stars can be found by studying the aftermath of their explosions. In its more than twelve years of science operations, NASA's Chandra X-ray Observatory has studied many of these supernova remnants sprinkled across the Galaxy.

The latest example of this important investigation is Chandra's new image of the supernova remnant known as G350.1-0.3. This stellar debris field is located some 14,700 light years from the Earth toward the center of the Milky Way.

Evidence from Chandra and from ESA's XMM-Newton telescope suggest that a compact object within G350.1-0.3 may be the dense core of the star that exploded. The position of this likely neutron star, seen by the arrow pointing to "neutron star" in the inset image, is well away from the center of the X-ray emission. If the supernova explosion occurred near the center of the X-ray emission then the neutron star must have received a powerful kick in the supernova explosion.

Data from Chandra and other telescopes suggest this supernova remnant, as it appears in the image, is between 600 and 1,200 years old. If the estimated location of the explosion is correct, this means that the neutron star has been moving at a speed of at least 3 million miles per hour since the explosion This is comparable to the exceptionally high speed derived for the neutron star in Puppis A, another neutron star moving at a blistering pace within a supernova remnant. The G350.1-0.3 data provide new evidence that extremely powerful "kicks" may be imparted to neutron stars left behind once the supernova has exploded.

Another intriguing aspect of G350.1-0.3 is its unusual shape. While many supernova remnants are nearly circular, G350.1-0.3 is strikingly asymmetrical as seen in the Chandra data in this image (gold). Infrared data from NASA's Spitzer Space Telescope (light blue) also trace the morphology found by Chandra. Astronomers think that this bizarre shape is due to stellar debris field expanding into a nearby cloud of cold molecular gas.

The age of 600-1200 years puts the explosion that created G350.1-0.3 in the same time frame as other famous supernovas that formed the Crab and SN 1006 supernova remnants. However, it is unlikely that anyone on Earth would have seen the explosion because of the obscuring gas and dust that lies along our line of sight to the remnant.