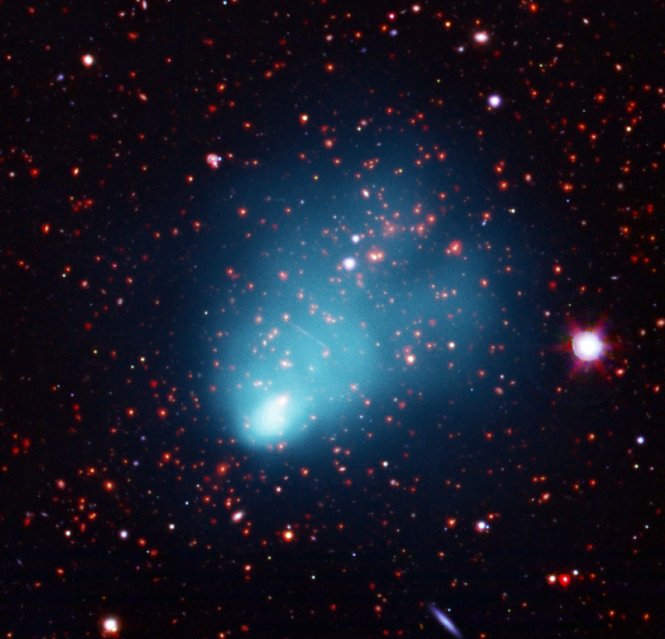 A composite image shows El Gordo in X-ray light from NASA's Chandra X-ray Observatory in blue, along with optical data from the European Southern Observatory's Very Large Telescope (VLT) in red, green, and blue, and infrared emission from the NASA's Spitzer Space Telescope in red and orange.

X-ray data from Chandra reveal a distinct cometary appearance of El Gordo, including two "tails" extending to the upper right of the image. Along with the VLT's optical data, this shows that El Gordo is, in fact, the site of two galaxy clusters running into one another at several million miles per hour. This and other characteristics make El Gordo akin to the well-known object called the Bullet Cluster, which is located almost 4 billion light years closer to Earth.

As with the Bullet Cluster, there is evidence that normal matter, mainly composed of hot, X-ray bright gas, has been wrenched apart from the dark matter in El Gordo. The hot gas in each cluster was slowed down by the collision, but the dark matter was not.

El Gordo is located over seven billion light years from Earth, meaning that it is being observed at a young age. According to the scientists involved in this study, this cluster of galaxies is the most massive, the hottest, and gives off the most X-rays of any known cluster at this distance or beyond.

The central galaxy in the middle of El Gordo is unusually bright and has surprisingly blue colors in optical wavelengths. The authors speculate that this extreme galaxy resulted from a collision and merger between the two galaxies at the center of each cluster.

Using Spitzer data and optical imaging it is estimated that about 1% of the total mass of the cluster is in stars, while the rest is found in the hot gas that fills the space between the stars and is detected by Chandra This ratio of stars to gas is similar with results from other massive clusters.