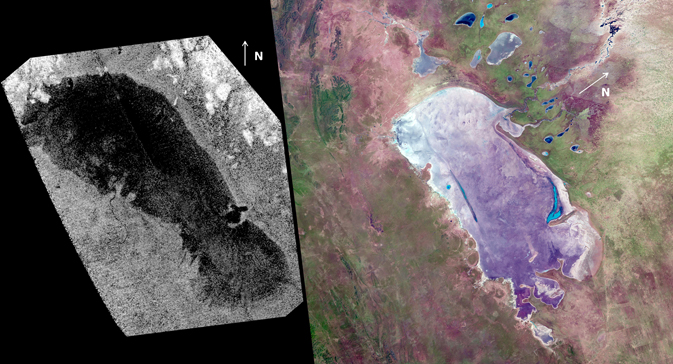 A recent study finds that the lake known as Ontario Lacus on Saturn's moon Titan (left) bears striking similarity to a salt pan on Earth known as the Etosha Pan (right). Image credit: NASA/JPL-Caltech and NASA/USGS
› Full image and caption

A new study analyzing data from NASA's Cassini spacecraft suggests that the lake, known as Ontario Lacus, behaves most similarly to what we call a salt pan on Earth.

A group led by Thomas Cornet of the Université de Nantes, France, a Cassini associate, found evidence for long-standing channels etched into the lake bed within the southern boundary of the depression. This suggests that Ontario Lacus, previously thought to be completely filled with liquid hydrocarbons, could actually be a depression that drains and refills from below, exposing liquid areas ringed by materials like saturated sand or mudflats.

"We conclude that the solid floor of Ontario Lacus is most probably exposed in those areas," said Cornet, whose paper appears in a recent issue of the journal Icarus.

These characteristics make Ontario Lacus very similar to the Etosha salt pan on Earth, which is a lake bed that fills with a shallow layer of water from groundwater levels that rise during the rainy season. This layer then evaporates and leaves sediments like tide marks showing the previous extent of the water.

"Some of the things we see happening in our own backyard are right there on Titan to study and learn from," said Bonnie Buratti, a co-author and Cassini team member based at NASA's Jet Propulsion Laboratory in Pasadena, Calif. "On Earth, salt pans tend to form in deserts where liquids can suddenly accumulate, so it appears the same thing is happening on Titan."

While the liquid on Titan is methane, ethane and propane rather than water, the cycle appears to work in a very similar fashion to the water cycle on Earth. Beyond Earth, Titan is the only other world known to bear stable liquids on its surface. There, the full hydrocarbon cycle is based on hydrogen, carbon and nitrogen, and takes place between the atmosphere, the surface and the subsurface. Titan's lakes are an integral part of this process.

This latest paper is part of an ongoing study of Ontario Lacus, the largest lake in Titan's south polar region. Cassini has been observing the lake with multiple instruments and employing multiple methods of analysis to see if Titan, like Earth, changes with the seasons. During the time Cassini has been exploring the Saturn system, Titan's southern hemisphere has transitioned from summer to fall.