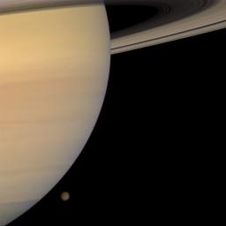 Titan, the largest of Saturn's moons, is about to slip behind the planet in this portrait captured by the Cassini spacecraft in 2008. Credit: NASA's Jet Propulsion Laboratory 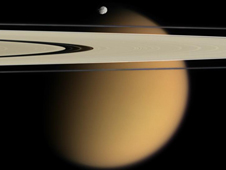 The blurring effects of Titan's aerosol are obvious in this image, where the orange moon peeks from behind two of Saturn's rings. Small, battered Epimetheus, another of Saturn's 62 moons, appears just above the rings. Credit: NASA/JPL/Space Science Institute
› Larger image 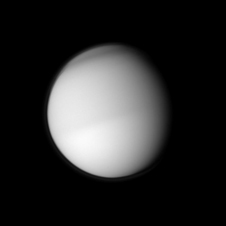 Titan's northern half, where it's early spring, appears slightly darker than the southern half, where it's early fall, in this image taken on March 22, 2010. Like Earth, Titan has four distinct seasons, each of which lasts about seven of Earth's years. Credit: NASA/JPL/Space Science Institute
› Larger image Every day is a bad-air day on Saturn's largest moon, Titan. Blanketed by haze far worse than any smog belched out in Los Angeles, Beijing or even Sherlock Holmes's London, the moon looks like a dirty orange ball. Described once as crude oil without the sulfur, the haze is made of tiny droplets of hydrocarbons with other, more noxious chemicals mixed in. Gunk.

Icky as it may sound, Titan is really the rarest of gems: the only moon in our solar system with an atmosphere worthy of a planet. This atmosphere comes complete with lightning, drizzle and occasionally a big, summer-downpour style of cloud made of methane or ethane -- hydrocarbons that are best known for their role in natural gas.

Unlike Titan's brownish haze, the ice clouds have the pearly white appearance of freshly fallen snow. Their existence is the latest clue to the workings of Titan's intriguing atmosphere and its one-way "cycle" that delivers hydrocarbons and other organic compounds to the ground as precipitation. Those compounds don't evaporate to replenish the atmosphere, but somehow the supply has not run out (yet?).

"This is the first time we have been able to get details about these clouds," says Samuelson, an emeritus scientist at Goddard and the co-author of the paper. "Previously, we had a lot of information about the gases in Titan's atmosphere but not much about the [high-altitude] clouds."

Puffy methane and ethane clouds had been found before by ground-based observers and in images taken by Cassini's imaging science subsystem and visual and infrared mapping spectrometer. Compared to those clouds, these are much thinner and located higher in the atmosphere. "They are very tenuous and very easy to miss," says Anderson, the paper's lead author. "The only earlier hints that they existed were faint glimpses that NASA's Voyager 1 spacecraft caught as it flew by Titan in 1980."

Out on a Limb

Even before Voyager 1 reached Titan, scientists knew the moon was wrapped in a thick atmosphere that probably contained hydrocarbons. Part of that atmosphere, Voyager found, is a haze so smothering that it hides every bit of the moon's surface.

Only a small amount of visible light penetrates this haze, or aerosol, so studies rely on instruments that operate at wavelengths beyond human sight. This is how Voyager learned that Titan's atmosphere is made mostly of nitrogen, as is Earth's. Unlike Earth's atmosphere, though, Titan's has neither oxygen nor water to speak of. Instead, it contains small amounts of organic materials, including members of the hydrocarbon family such as methane, ethane and propane.

Voyager also picked up indications that Titan's stratosphere, the second-lowest layer of its atmosphere, harbored "ices made from some exotic organic compounds," Samuelson says. "At the time, that was about all we could tell."

Fast-forward a quarter-century to mid-2006, past decades of research conducted from telescopes, past Cassini's arrival at Saturn, past the European Space Agency's Huygens probe landing on Titan and taking the first pictures of the surface, past the discovery of the methane and ethane clouds. At this point, Cassini continues to orbit Saturn and visit Titan and other moons periodically.

More than a half-dozen hydrocarbons have been identified in gas form in Titan's atmosphere, but many more probably lurk there. Researchers worldwide are looking for them, including Anderson and Samuelson, who are using the CIRS (pronounced "sears") instrument on Cassini.

Pinpointing the altitudes where such gases turn into ices is painstaking work. The researchers scan up and down the atmosphere, pausing at each altitude to catalog a slew of signals that have to be teased apart later so that the molecules can be identified. "You can learn a lot about a compound, even if you have no idea what it is, by looking at how it is distributed vertically," says Anderson. "Where does it accumulate? Where does it dissipate? How thick is the boundary? Is there layering going on?"

Anderson and Samuelson start a series of observations near Titan's north pole, at roughly the same latitudes Voyager looked at, 62 °N and 70 °N. On Earth, these would fall just inside and outside the ring for the Arctic Circle.

The team focuses on the observations made when CIRS is positioned to peer into the atmosphere at an angle, grazing the edge of Titan. This path through the atmosphere is longer than the one when the spacecraft looks straight down at the surface. Planetary scientists call this "viewing on the limb," and it raises the odds of encountering enough molecules of interest to yield a strong signal.

It works. When the researchers comb through their data, they succeed in separating the telltale signatures of ice clouds from the aerosol. "These beautiful, beautiful ice clouds are optically thin, and they're diffuse," says Anderson. "But we were able to pick up on them because of the long path lengths of the observations."

In addition to spotting the clouds, the researchers gather enough information to measure the sizes of the ice particles. The results get reported in a January 2010 Icarus paper by Anderson, Samuelson, their Goddard colleague Gordon Bjoraker and Richard Achterberg, a University of Maryland staff member working at Goddard.

"That was convincing evidence," Anderson says. "What Voyager had seen was real."

Clouds on Titan can't be made from water because of the planet's extreme cold. "If Titan has any water on the surface, it would be solid as a rock," says Goddard's Michael Flasar, the Principal Investigator for CIRS.

Instead, the key player is methane. The action starts high in the atmosphere, where some of the methane gets broken up and reforms into ethane and other hydrocarbons, or combines with nitrogen to make materials called nitriles. Any of these compounds can probably form clouds if enough accumulates in a sufficiently cold area.

The cloud-forming temperatures occur in the "cold, cold depths of Titan's stratosphere," says Anderson. Researchers think that the compounds get moved downward by a constant stream of gas flowing from the pole in the warmer hemisphere to the pole in the colder hemisphere. There, the gas sinks.

This circulation pattern steals so much gas from the warmer hemisphere that researchers can measure the imbalance. The influx of all this gas gives the colder hemisphere more clouds. "At colder temperatures, more gas will condense anyway," Anderson explains, "and on top of that, the atmosphere dumps a whole bunch of extra gas there."

She and Samuelson think this is why the ice clouds were first spotted in the north. When Voyager flew by in November 1980, the north had just crossed from winter into spring. And the north was in mid-winter when the team conducted their early observations. (One Titan year lasts 29-1/2 Earth years, so spring came again to Titan's north in August 2009.)

Still, the team figured, the south shouldn't lack ice clouds; it should just have fewer of them. "For 30 years, Bob [Samuelson] had been saying that these clouds should exist in the southern hemisphere," says Anderson, "so we decided to look."

"The fact that the clouds are more enhanced at the cold polar region is a promising sign," says Flasar. "It strengthens this idea that the molecules making up these clouds are being carried downward by this global circulation."

Part of Titan's allure has long been the organic compounds in the atmosphere, especially because some are thought to be involved in the events that led to life on Earth. One of those is cyanoacetylene, a member of the nitrile family. The compound's distinctive signature made it the first to be picked up in the northern ice clouds by Voyager 1 and by Anderson and Samuelson.

To make a connection between these molecules and life isn't the point for Anderson, though. "I just love ices and aerosols," she says, "and Titan is this great natural laboratory for studying them."

As the researchers continue to identify compounds in Titan's atmosphere, the next likely candidate for an ice is hydrogen cyanide, a nitrile with an earthly reputation as a poison. In the aerosol, the team is investigating an intriguing feature in the data that seems to represent larger hydrocarbons than anybody has identified before, according to Samuelson. Early clues suggest the signature could indicate polycyclic aromatic hydrocarbons (PAHs), which typically get noticed on Earth as pollutants released by the burning of fossil fuels. In space, PAHs form in the regions where stars are born and die.

Each nugget of information like this is helping scientists piece together the life cycle and ultimate fate of Titan's hydrocarbons, which never reenter the atmosphere via evaporation. "They fall to the surface, and it's a dead end," says Samuelson, "and yet Titan's atmosphere still has methane in it. We are trying to find out why."

At first, Titan's frozen nitriles seem entirely unrelated to Earth clouds. Even putting aside their exotic ingredients, they form much higher in the atmosphere: at altitudes of about 30 to 60 miles (in the stratosphere) versus no more than 11 miles (in the troposphere) for nearly all Earth clouds.

But Earth does have a few polar stratospheric clouds that appear over Antarctica (and sometimes in the Arctic) during winter. These clouds form in the exceptionally cold air that gets trapped in the center of the polar vortex, a fierce wind that whips around the pole high in the stratosphere. This is the same region where Earth's ozone hole is found.

Titan has its own polar vortex and may even have a counterpart to our ozone hole. The degree of similarity is intriguing, says Flasar, given the different compositions and chemistries of the stratospheric clouds on Earth versus Titan.

"We are starting to find out how similar Titan's clouds are to Earth's," says Samuelson. "How do they compare? How do they not compare?"

The big test of scientists' understanding of Titan's atmosphere will come in 2017, when summer comes to the north and the south plunges into winter. "We expect to find a complete reversal in the circulation of gas then," says Anderson. "The gas should start to flow from the north to the south. And that should mean most of the high-altitude ice clouds will be in the southern hemisphere."

Other major changes are in store for Titan then, Flasar adds, including the disappearance of the fierce winds around the north pole. "The big question is: will the vortex go out with a bang or whimper?" he says. "On Earth, it goes out with a bang. It's very dramatic. But on Titan, maybe the vortex just gradually fizzles out like the smile of the Chesire cat."

The Cassini-Huygens mission is a cooperative project of NASA, the European Space Agency, and the Italian Space Agency. NASA's Jet Propulsion Laboratory, Pasadena, Calif., a division of the California Institute of Technology in Pasadena, manages the mission for NASA's Science Mission Directorate, Washington, D.C. The Cassini orbiter and its two onboard cameras were designed, developed and assembled at JPL. The CIRS team is based at NASA's Goddard Space Flight Center in Greenbelt, Md., where the instrument was built.