This animation based on data obtained by NASA's Cassini Spacecraft shows how the "explosions" of hot plasma on the night side (orange and white) periodically inflate Saturn's magnetic field (white lines). 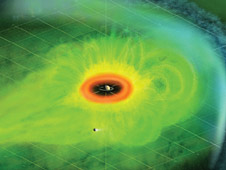 This is an artist's concept of the Saturnian plasma sheet based on data from Cassini magnetospheric imaging instrument. Image credit: NASA/JPL/JHUAPL
› Full image and caption

A new analysis based on data from NASA's Cassini spacecraft finds a causal link between mysterious, periodic signals from Saturn's magnetic field and explosions of hot ionized gas, known as plasma, around the planet.

Scientists have found that enormous clouds of plasma periodically bloom around Saturn and move around the planet like an unbalanced load of laundry on spin cycle. The movement of this hot plasma produces a repeating signature "thump" in measurements of Saturn's rotating magnetic environment and helps to illustrate why scientists have had such a difficult time measuring the length of a day on Saturn.

"This is a breakthrough that may point us to the origin of the mysteriously changing periodicities that cloud the true rotation period of Saturn," said Pontus Brandt, the lead author on the paper and a Cassini team scientist based at the Johns Hopkins University Applied Physics Laboratory in Laurel, Md. "The big question now is why these explosions occur periodically."

A new animation showing the linked behavior is available at http://www.nasa.gov/cassini and http://saturn.jpl.nasa.gov .

The visualization shows how invisible hot plasma in Saturn's magnetosphere – the magnetic bubble around the planet -- explodes and distorts magnetic field lines in response to the pressure. Saturn's magnetosphere is not a perfect bubble because it is blown back by the force of the solar wind, which contains charged particles streaming off the sun.

Scientists are still investigating what causes Saturn's magnetotail to collapse, but there are strong indications that cold, dense plasma originally from Saturn's moon Enceladus rotates with Saturn. Centrifugal forces stretch the magnetic field until part of the tail snaps back.

The snapping back heats plasma around Saturn and the heated plasma becomes trapped in the magnetic field. It rotates around the planet in islands at the speed of about 100 kilometers per second (200,000 mph). In the same way that high and low pressure systems on Earth cause winds, the high pressures of space cause electrical currents. Currents cause magnetic field distortions.

A radio signal known as Saturn Kilometric Radiation, which scientists have used to estimate the length of a day on Saturn, is intimately linked to the behavior of Saturn's magnetic field. Because Saturn has no surface or fixed point to clock its rotation rate, scientists inferred the rotation rate from timing the peaks in this type of radio emission, which is assumed to surge with each rotation of a planet. This method has worked for Jupiter, but the Saturn signals have varied. Measurements from the early 1980s taken by NASA's Voyager spacecraft, data obtained in 2000 by the ESA/NASA Ulysses mission, and Cassini data from about 2003 to the present differ by a small, but significant degree. As a result, scientists are not sure how long a Saturn day is.

"What's important about this new work is that scientists are beginning to describe the global, causal relationships between some of the complex, invisible forces that shape the Saturn environment," said Marcia Burton, the Cassini fields and particles investigation scientist at NASA's Jet Propulsion Laboratory, Pasadena, Calif. "The new results still don't give us the length of a Saturn day, but they do give us important clues to begin figuring it out. The Saturn day length, or Saturn's rotation rate, is important for determining fundamental properties of Saturn, like the structure of its interior and the speed of its winds."

Plasma is invisible to the human eye. But the ion and neutral camera on Cassini's magnetospheric imaging instrument provides a three-dimensional view by detecting energetic neutral atoms emitted from the plasma clouds around Saturn. Energetic neutral atoms form when cold, neutral gas collides with electrically-charged particles in a cloud of plasma. The resulting particles are neutrally charged, so they are able to escape magnetic fields and zoom off into space. The emission of these particles often occurs in the magnetic fields surrounding planets.

By stringing together images obtained every half hour, scientists produced movies of plasma as it drifted around the planet. Scientists used these images to reconstruct the 3-D pressure produced by the plasma clouds, and supplemented those results with plasma pressures derived from the Cassini plasma spectrometer. Once scientists understood the pressure and its evolution, they could calculate the associated magnetic field perturbations along the Cassini flight path. The calculated field perturbation matched the observed magnetic field "thumps" perfectly, confirming the source of the field oscillations.

"We all know that changing rotation periods have been observed at pulsars, millions of light years from our solar system, and now we find that a similar phenomenon is observed right here at Saturn," said Tom Krimigis, principal investigator of the magnetospheric imaging instrument, also based at the Applied Physics Laboratory and the Academy of Athens, Greece. "With instruments right at the spot where it's happening, we can tell that plasma flows and complex current systems can mask the real rotation period of the central body. That's how observations in our solar system help us understand what is seen in distant astrophysical objects."

The Cassini-Huygens mission is a cooperative project of NASA, the European Space Agency and the Italian Space Agency. NASA's Jet Propulsion Laboratory, a division of the California Institute of Technology in Pasadena, Calif. manages the mission for NASA's Science Mission Directorate, Washington, D.C. The magnetic imaging instrument team is based at the Johns Hopkins University Applied Physics Laboratory, Laurel, Md.

For more information about the Cassini mission, visit: http://www.nasa.gov/cassini and http://saturn.jpl.nasa.gov .