A Gas Giant with Super-Fast Winds 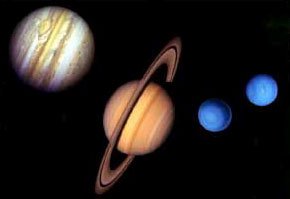 The sixth planet from the sun, Saturn formed more than four billion years ago. With a diameter of 120,536 kilometers (almost 75,000 miles) it is the second largest planet in the solar system. While almost as big in size as Jupiter, Saturn's density is the lowest in the solar system and its mass only 30 percent that of Jupiter. Saturn's specific gravity (0.7) is less than that of water. In fact, Saturn's density is so low that it could float in an imaginary gigantic bathtub.

Like Jupiter, Saturn is made up mainly of hydrogen and helium gases. However, it is twice as far from Earth as Jupiter, and from Saturn the Sun appears about 10 times smaller than how we see it from Earth. On average, an area on Earth receives 90 times the amount of sunlight than the same area would on Saturn. Scientists believe Saturn's interior is similar to Jupiter's, consisting of a rocky core much like the size of Earth, a liquid metallic hydrogen layer and a molecular hydrogen layer. Traces of various ices are also present. Saturn's interior is hot. At the core, the temperature is about 12,000 degrees Kelvin (21,150 degrees Fahrenheit). Saturn radiates more energy into space than it receives from the Sun.

Winds in Saturn's upper atmosphere can reach speeds of 1,800 kilometers (1,118 miles) per hour near its equator. In contrast, the strongest hurricane-force winds on Earth top out at about 396 kilometers (246 miles) per hour. These super-fast winds, combined with heat rising from within the planet's interior, cause the yellow and gold bands visible in Saturn's atmosphere. 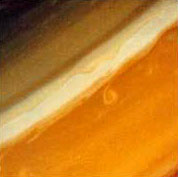 Because of its distance from the center of our solar system, the ringed planet takes almost 30 years to orbit the sun. Saturn, however, spins on its axis very quickly. A Saturnian day only lasts 10 hours and 15 minutes. The fast rate of rotation and the planet's gaseous composition create unusually flat poles, and result in bulges at the equator which are noticeable even by a small telescope.

When it is in the nighttime sky, Saturn is easily visible to the naked eye. Though it is not nearly as bright as Jupiter, it is easy to identify as a planet because it doesn't "twinkle" like stars do. The planet's rings and its larger satellites are visible with a small astronomical telescope.
Cassini Mission
NASA's Jet Propulsion Laboratory
› Back To Top