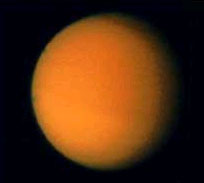 Discovered in 1655 by the Dutch astronomer Christiaan Huygens, Titan is the biggest of the 31 known moons orbiting Saturn. It is a cold world enclosed by a thick, hazy atmosphere impenetrable by optical instruments.

With a diameter of 5,150 kilometers (3,200 miles), Titan is the second largest moon in the solar system. It's bigger than our own moon and even bigger than the planet Mercury. Only Jupiter's moon Ganymede is larger than Titan, with a diameter barely 112 kilometers (62 miles) greater. Temperature at the surface is about minus 178 Celsius (minus 289 Fahrenheit).

Titan is of great interest to scientists because it is the only moon in the solar system known to have clouds and a mysterious, thick, planet-like atmosphere. In 1980, during a flyby of Titan, NASA's Voyager 1 tried to take close up images of the natural features of the landscape but it wasn't able to penetrate the thick clouds. The only results netted were slight color and brightness variations within the atmosphere. Titan's atmospheric pressure is about 60 percent greater than Earth's -- roughly the same pressure found at the bottom of a swimming pool.

In 1994, NASA's Hubble Space Telescope recorded pictures of Titan, which suggested that a huge bright "continent" exists on its hemisphere that faces forward in orbit. These Hubble results don't prove that liquid "seas" exist, however; only that Titan has large bright and dark regions on its surface.

The instruments aboard the Cassini-Huygens spacecraft are designed to uncover many of Titan's characteristics. During dozens of flybys, the Cassini orbiter will map Titan with cloud-penetrating radar and collect atmospheric data. The Huygens probe will dive through Titan's dense atmosphere with instruments capable of analyzing its components. 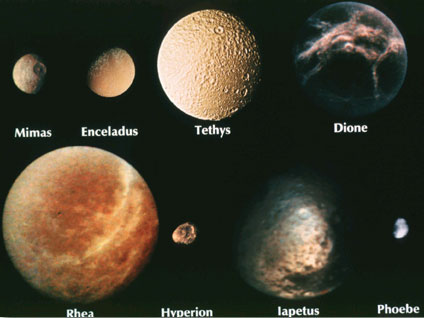 Image above: Some of Saturn's most interesting moons.


Combined with the "big picture" information that the orbiter Cassini will collect during Titan flybys, data from the Huygens probe will provide scientists with critical information that may shed light on ancient questions, such as "Where did we come from?" And, "How did the planets form?"

Because of the extremely cold temperatures typical of celestial bodies that are that far away from the Sun, the structure of Titan's chemical atmosphere is in a state of deep freeze. It is this chemical composition that interests scientists a great deal because Titan's atmosphere might consist of compounds similar to those present in the primordial days of the Earth's atmosphere. Titan's thick cloudy atmosphere is mostly nitrogen, like Earth's, but may contain much higher percentages of "smog-like" chemicals such as methane and ethane. The smog may be so thick that it actually rains "gasoline-like" liquids. The organic nature of some of the chemicals found in Titan's atmosphere might indicate that this fascinating moon could harbor some form of life.

Besides Titan, there are at least 30 other moons orbiting Saturn. Some carry exotic names such as Prometheus, Pandora, Enceladus and Hyperion, others are known by plain letter and digits codes, as in S/2000 S4 and S/2000 S5.

These moons vary considerably in shape and size. Some appear to be porous, icy bodies with craters, ridges and valleys -- others show corrugated, irregular terrain. Some appear to have formed billions of years ago, while others appear to be part of a bigger, fragmented body. Some moons appear to have rocky surfaces, and might be covered by organic material similar to the complex substances found in the most primitive meteorites. For example, the closest large moon of Saturn, Enceladus, appears to have a very bright, white surface, as it reflects almost 100 percent of the sunlight that hits it. Because Enceladus reflects so much sunlight, the surface temperature is only minus 201 Celsius (minus 330 Fahrenheit). 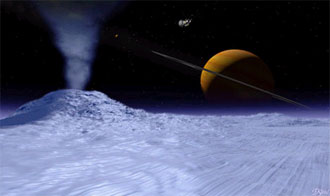 According to images recorded by Voyager 2 in 1981, Enceladus has fissures, plains, corrugated terrain and other crustal deformation. All of this indicates that the interior of the moon may be liquid today, even though it should have frozen eons ago.

For the most part, very little is known about Saturn's moons, except through data gathered that measures their brightness. These moons' estimated sizes are based on assumptions of their reflectivity.

These 31 known moons vary greatly in their orbital positions within the Saturn system -- some are as close as 133,600 kilometers (83,015 miles) to the planet, others as far as almost 13 million kilometers (about 8 million miles). During its four-year mission in this immense region, the Cassini spacecraft will extensively photograph these moons, and collect data that will increase our understanding of their composition.
Cassini Mission
NASA's Jet Propulsion Laboratory
› Back To Top