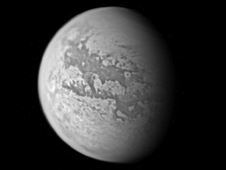 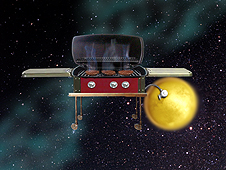 Doing the math: How do we get from "150 billion barbeque cookouts" to "two trillion" burgers?

You can fit 700 million barrels of propane into about six billion 20-pound tanks of liquefied propane gas (LPG). As most Labor Day cookouts will probably occur on this planet, we will use Earth as our barbecue laboratory. On Earth, a full tank of LPG burns for about nine hours - enough time to turn out 25 to 30 meals. That brings us to about 150 to 180 billion meals. If you average 12 medium-well patties per meal, then we're talking about 2 trillion burgers. When it comes to figuring out how many hot dogs could be cooked, you're on your own. Credit: NASA/JPL
› Larger view Since its discovery by Dutch astronomer Christiaan Huygens in 1655, Saturn's most massive moon, Titan, has been known as a place of mystery and intrigue. The large, cloud-enshrouded moon is such a scientific enigma that for the past five years, it has been targeted by NASAs Cassini spacecraft with more than 60 probing flybys. One of its latest findings could be a valuable asset to future generations of space explorers hunting for materials to whip up a Labor Day barbecue.

"Titan's atmosphere is extremely rich in an assortment of hydrocarbon chemicals, including propane, which we use to fill our barbecue tanks," said Cassini scientist Conor Nixon of the University of Maryland, College Park. "Titan's atmospheric inventory would fuel about 150 billion barbecue cookouts, enough for several thousand years of Labor Days."

For those who are burger, barbecue or Titan challenged, propane is a three-carbon alkane (a chemical compound consisting of carbon and hydrogen), that is non-toxic and heavier than air. With its low boiling point of minus 43.6 degrees Fahrenheit (minus 42 degrees Centigrade), propane vaporizes as soon as it is released from its pressurized container. Here on Earth, propane is commonly used as a fuel for forklifts, flamethrowers, residential central heating, portable stoves, hot air balloons, and - of course - barbecues. On other worlds propane is an untapped resource.

This gas of many terrestrial uses was first discovered in Titan's atmosphere back in 1980 when NASA's Voyager 1 spacecraft flew past the Saturnian system. Over the years, both ground and space-based instruments have added to the research, but accurately quantifying the amount of propane on Titan has proved elusive. Then, in 2004, the Cassini spacecraft entered orbit around Saturn.

Measuring the amount of propane on Titan is important to scientists because the gas is a very complex molecule, and its signature in the infrared spectrum is close to those of several molecules scientists are hoping to discover in Titan's atmosphere.

"It was not so much that measuring propane was our endgame, but it helps enormously in our hunt for other complex molecules," said Nixon. "These include pyrimidines that are potential building blocks for biological molecules, such as the nuceleobases of our DNA." If we can detect them on Titan, that would be very significant."

Propane on Titan was measured using data from Cassini's Composite Infrared Spectrometer instrument. During multiple flybys of the moon between June 2004 and June 2008, the instrument measured infrared light from the edge of Titan's atmosphere. After a detailed analysis of the gas's characteristic 'emission bands' or signature, using computer predictions backed by the latest laboratory research into its infrared spectrum, the Composite Infrared Spectrometer team came up with an estimate of the amount of propane in Titan's atmosphere So exactly how much propane does it take to fire 150 billion cookouts?

"We estimate there are nearly 700 million barrels of propane on Titan, said Nixon. "That is enough to fill six-billion 20-pound tanks of liquefied propane gas. It sounds like a huge amount, but that would satisfy total U.S. consumption of propane for only 18 months."

Which still leaves, with regards to Saturn's biggest moon, one Labor Day staple still to be determined. How many hamburgers could future generations of outer-planet explorers grill using Titan's atmospheric propane?

Nixon is the lead author on a paper about propane on Titan to be published in an upcoming issue of Planetary and Space Science.

The Cassini-Huygens mission is a cooperative project of NASA, the European Space Agency and the Italian Space Agency. The Cassini orbiter was designed, developed and assembled at JPL. JPL manages the mission for the Science Mission Directorate at NASA Headquarters in Washington. Cassini's Composite Infrared Spectrometer team is based at NASA's Goddard Space Flight Center, Greenbelt, Md.

More information about the Cassini mission is available at http://www.nasa.gov/cassini or http://saturn.jpl.nasa.gov .
› Back To Top