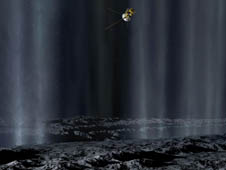 In this artist's concept, the Cassini spacecraft makes a close pass by Saturn's inner moon Enceladus to study plumes from geysers that erupt from giant fissures in the moon's southern polar region. Image copyright: Karl Kofoed Scientists continue to search for the cause of the geysers on Saturn's moon Enceladus. The geysers are visible as a large plume of water vapor and ice particles escaping the moon. Inside the plume are jets of dust and gas. What causes and controls the jets is a mystery. The Cassini spacecraft continues to collect new data to look for clues.

At the heart of the search is the question of whether the jets originate from an underground source of liquid water. Some theories offer models where the jets could be caused by mechanisms that do not require liquid water. Painstaking detective work by Cassini scientists is testing the possibilities to get closer to an answer.

What generates Enceladus' jets is a burning question in planetary science, because if liquid water is involved, Enceladus would be shown to have everything it needs, in theory, to provide a habitable environment.

One recent model offered the possibility that the jets could be violent bursts of volatile ices freshly exposed to space when Saturn's tidal forces would open vents inside the "tiger stripe" region of the moon's south pole.

New Cassini findings reported in the Nov. 27 issue of the journal Nature, however, cast doubt on that hypothesis. When Enceladus is farther away from Saturn, the theory goes, the vents would compress, reducing or shutting off the jets.

"Our observations do not agree with the predicted timing of the faults opening and closing due to tidal tension and compression," said JPL scientist Candice Hansen of Cassini's ultraviolet imaging spectrograph team.

At the same time, Hansen said, the new findings support at least one theory that attributes the jets to a liquid water source inside Enceladus.

Hansen and her team conducted experiments in 2005 and 2007 to observe starlight passing through Enceladus' plume. During this so-called "stellar occultation," the spectrometer measured the water vapor content and density of the jets. The experiment tested the prediction that a greater amount of material would be measured coming from open fissures in 2005, and less material in 2007 when the fissures would be closing.

Instead, reports Hansen, the opposite was found to be true. The observations showed that the plume was almost two times as dense in 2007 as in 2005, contradicting the model that holds tidal squeezing is in control of the plumes. "We don't rule it out entirely because of the different geometries of our two occultation, but we also definitely do not substantiate this hypothesis," said Hansen.

Hansen said the new Cassini observations, however, do support a mathematical model developed in 2007, which treats the vents as nozzles that channel water vapor from a warm, probably liquid source, to the surface at supersonic speeds.

The authors of that model theorize that only high temperatures close to the melting point of water ice could account for the large number of ice particles present in steady state in Enceladus' jets. A liquid water source inside Enceladus, they said, could be similar to Earth's Lake Vostok, beneath Antarctica, where liquid water exists beneath the ice. In Enceladus' case, the ice grains would then condense from the vapor escaping from the water source and stream through cracks in the ice crust to the surface and out into space.

What causes and controls the jets, and whether there is liquid water remain uncertain, but there may be more clues soon, because Enceladus is a prime target for Cassini to study in its extended Equinox Mission. The presence of liquid water inside Enceladus would have major implications for future astrobiological studies on the possibility of life within icy bodies of the outer solar system.

The Cassini-Huygens mission is a cooperative project of NASA, the European Space Agency and the Italian Space Agency. JPL, a division of the California Institute of Technology in Pasadena, manages the Cassini mission for NASA's Science Mission Directorate, Washington, D.C. JPL designed, developed and assembled the Cassini orbiter. Media Relations Contact:
Carolina Martinez
818-354-9382
› Back To Top