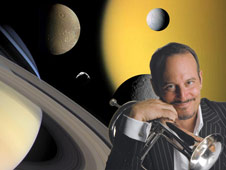 Imagine being able to listen to the music of the ringed planet Saturn. Now you can! Musician Jeff Oster has turned the eerie sounds coming from the Cassini spacecraft into "Saturn Calling," a beautiful, ambient, new age jazz piece. "Saturn Calling" won the 2008 Independent Music Award for Best New Age Song and is the first song heard on Oster’s latest album, "True."

Like all planets in our solar system, Saturn "sings" with powerful radio signals. Scientists used data collected by the Cassini spacecraft's radio and plasma wave science instrument to produce some of Saturn’s sounds so that we can appreciate the "natural music" back here on Earth. When musician and space enthusiast Jeff Oster listened to some of these Saturn sounds, he felt that it belonged in a piece that he was working on at the time.

The first sounds that you hear when listening to Oster’s latest album "True" are the sounds of Saturn auroras. "When I tell [listeners] that it’s the actual sounds of the planet –- it adds an incredibly new and important dimension to the music," Oster explains. "It's Saturn calling out into space with the unique radio waves that it generates –- and it's true –- it's what's really happening."

In April 2002, when the Cassini spacecraft was 2.5 astronomical units (374 million kilometers, or 234 million miles) away from Saturn, the radio plasma instrument began to listen to the radio signals of Saturn's auroras. Scientists believe that the complicated patterns (similar to those of the Earth's Northern and Southern auroral lights) are made by many small radio sources dancing along magnetic field lines in the areas where auroras form. These radio signals sound like an eerie wind.

Fifty-year-old Oster, who has been playing the trumpet since age 8, became a limo driver and later a financial planner, but always kept his dream of being a professional musician. Oster explains that he is "more of a musician than [a financial planner], but hey, someone has to pay the bills...." Eventually he made enough money to afford to follow his passion full time.

Oster explains that he makes music that he likes and hopes that others like it too. "Saturn Calling," like all his music, wasn't created for the commercial music industry. It simply sounds good to Oster; it feels the way he wants it to feel. He then "throws it out into the world" and sees what happens.

On "Saturn Calling," Oster explains, he played the flugelhorn because his "soul gravitates towards the warmer, darker sound." Oster hopes that one day his piece and other sounds of Saturn can be used in a larger forum. "I envision this music with a symphony orchestra playing –- it really lends itself to that sort of a vibe for me." 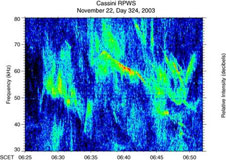 Eerie Sounds of Saturn's Radio Emissions. Inspiration for Oster's music. Image credit: NASA/JPL/University of Iowa
›  Image caption and link to recording Oster hopes "Saturn Calling" will make listeners want to learn more about Saturn and the Cassini mission. "I'm so happy to be even a little bitty part of this," he explains. "The song is very majestic, and so is [the Cassini] program. So is space. So are the planets. It's really come together in a very powerful and beautiful way."

Click here to learn about more sounds from the Cassini mission.

The Cassini-Huygens mission is a cooperative project of NASA, the European Space Agency and the Italian Space Agency. The Jet Propulsion Laboratory, a division of the California Institute of Technology in Pasadena, manages the mission for NASA's Science Mission Directorate, Washington, D.C. The Cassini orbiter was designed, developed and assembled at JPL. The radio and plasma wave science team is based at the University of Iowa, Iowa City. Media contact: Carolina Martinez/JPL 818-354-9382
› Back To Top