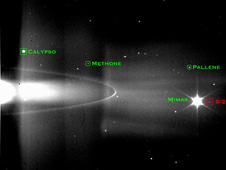 Several of Saturn's moons, including Methone, can be seen in this image.
› Animation and caption
Image credit: NASA/JPL/Space Science Institute
› Related release: Cassini Finds Mingling Moons May Share a Dark Past
Gaps in the soup of high energy particles near the orbits of two of Saturn's tiny moons indicate that Saturn may be surrounded by undiscovered, near-invisible partial rings. A paper in the February issue of the journal Icarus suggests the larger Saturnian moons may not be the only ones contributing material to Saturn's ring system.

A team of scientists has detected two peculiar breaks in the near-constant rain of high energy electrons that bombard Cassini when near Saturn. They made the discovery using Cassini's Low Energy Magnetospheric Measurement System, a part of the Magnetospheric Imaging Instrument. The gaping holes fall along the orbits of two newly discovered moons, Methone and Anthe. Methone, discovered by Cassini in 2004, is about 3 kilometers across (2 miles), while Anthe, discovered in Cassini images in 2007, is about 2 kilometers wide (1 mile). Both moons are located between the orbits of Mimas and Enceladus.

"These observations tell us that even Saturn's smallest moons could be a source of dust in the Saturnian system," said Elias Roussos, the paper's lead author from the Max Planck Institute for Solar System Research in Katlenburg-Lindau, Germany.

If the tiny moons are indeed feeding dust into the rings, Roussos says possible future detection and characterization of these rings by more Cassini sensors could provide information about the surface of the moons Methone and Anthe, which are difficult to observe due to their small size.

Moons are known to absorb high energy particles. The fact that particles are missing is sensed by Cassini in the same way there are brief moments without rain falling on the windshield when driving under a bridge. These gaps in the flow of electrons showed that something wide was absorbing the charged particles. However, the gaps Cassini saw at Methone and Anthe are so wide, about 1,000 to 3,000 kilometers (600 to 1,900 miles) across, that they cannot be explained solely by the presence of such tiny moons. Instead, the measurements may indicate that the two moons are losing dust from their surface, building up one or more arcs of material along their orbits. Each ring arc is expected to be a few thousand kilometers wide and to comprise large dust grains or dust clumps.

"The released material may develop into ring arcs due to the gravitational 'tug of war' between Saturn's larger moons, such as Mimas," added Roussos. "A similar process has been found to take place at the arc within Saturn's G-ring."

Meteoroid impacts on Methone and Anthe are the most likely cause of the release of this material from their surfaces. The same process is thought to have formed Jupiter's faint rings at the orbits of the moons Amalthea, Thebe, Metis and Adrastea. The same situation might be happening at Saturn. In fact, rings of similar origin have also recently been detected in Cassini images along the orbits of the Saturnian moons Janus, Epimetheus and Pallene.

"What's odd is that these inferred ring arcs still remain undetected in Cassini images, while the rings at Janus, Epimetheus and Pallene orbits, thought to form under the same process, are visible," said Roussos. "This means the dust grains making up these two different classes of rings have different characteristics and sizes. However the reason behind this difference is a mystery."