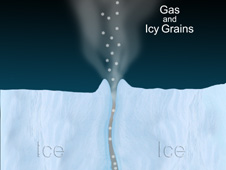 This graphic shows how the ice particles and water vapor observed spewing from geysers on Saturn's moon Enceladus may be related to liquid water beneath the surface. Image credit: NASA/JPL
›  Full image and caption
Scientists on the Cassini mission have become out-of-this world "plumbers" as they try to piece together what's happening inside the "pipes" feeding the plumes of Saturn's moon Enceladus.

Enceladus is jetting out giant geysers three times the size of the moon, and now scientists are beginning to understand how the ice grains are created and how they might have formed. Knowing the process of how the plume forms and the path the water-ice particles have to travel is giving them an insight into what may be a liquid reservoir or lake lying just beneath the surface.

"Since Cassini discovered the water vapor geysers, we've all wondered where this water vapor and ice are coming from. Is it from an underground water reservoir or are there some other processes at work? Now, after looking at data from multiple instruments, we can say there probably is water beneath the surface of Enceladus," said Juergen Schmidt, team member on Cassini's Cosmic Dust Analyzer at the University of Potsdam, Germany. This study appears in the Feb. 7, 2008, issue of the journal Nature.

The large number of ice particles observed spewing from the geysers and the steady rate at which these particles are produced require high temperatures, close to the melting point of ice, possibly resulting in an internal lake. The lake would be similar to Earth's Lake Vostok, beneath Antarctica, where liquid water exists locked in ice. The ice grains then condense in the vapor evaporating from the water, streaming through cracks in the ice crust to the surface.

The presence of liquid water inside Enceladus would have major implications for future astrobiology studies on the possibility of life on bodies in the outer solar system.

Scientists have studied the plume dynamics since 2005, collecting data from several Cassini remote sensing instruments and those that sample particles directly, like the Cosmic Dust Analyzer. They conclude that an internal lake at a temperature of about 273 Kelvin (32 degrees Fahrenheit) is the best way to account for the material jetting out of the geysers.

At these warm temperatures, liquid water, ice and water vapor mingle. The vapor escapes to the vacuum of space through cracks in Enceladus' ice crust. When the gas expands, it cools and the ice grains that make up the visible part of the plumes condense from the vapor. Vapor in the plumes is clocked at roughly the same speed as a supersonic jet, about 300 to 500 meters per second, or about 650 to 1,100 miles per hour. However, most of the condensed ice particles fail to reach Enceladus' escape velocity of 240 meters per second (536 miles per hour).

Pinball-like physics account for the slow speed of the particles. Shooting up through crooked cracks in the ice, the particles ricochet off the walls, losing speed, while the water vapor moves unimpeded up the crevasse. The vapor reboosts the frozen particles as they pinball off the walls, carrying them upward. Reaching nozzle-like openings at the surface, the faster-moving water vapor shoots high above Enceladus, becoming entrapped in Saturn's magnetosphere. Most of the particles, which have lost energy through collisions in transit, fail to achieve escape velocity and fall back to Enceladus' surface. Only about 10 percent escape Enceladus and form Saturn's E-ring.

"Our model provides a simple concept to understand how particles form, their speed and how they behave as they make their way out into space. If vapor temperature is too low, then the gas density is too small to push the grains out and we would not see such large amounts of particles," said Schmidt. "Therefore, we believe that at the site of evaporation, we must have temperatures near the melting point of water."

Scientists say that particles seen in the plumes are too numerous to have started from processes described in one existing model that requires low temperatures, proposing that gases may be trapped inside ice crystals. Another model suggests that water ice, suddenly exposed to the vacuum of space, sublimes, or boils, directly into vapor without liquefying first. But this would mean there are short bursts of activity, rather than the steady production of particles. The new model of grains condensing in a vent that evaporates from a liquid body is consistent with a steady production of particles, ejected from a localized source.

This research provides fundamental knowledge about solar system bodies, in particular those that, like our home planet, are homes to oceans - environments where life might evolve.

The next Enceladus flyby is in March 2008. The spacecraft closest approach will be at a mere 50 kilometers (30 miles) from the surface and the altitude will increase to about 200 kilometers (124 miles) as the spacecraft passes through the plumes. Cassini will sample the plumes directly and find out more about their makeup.

More information on the Cassini-Huygens mission is available at: http://saturn.jpl.nasa.gov and http://www.nasa.gov/cassini .

The Cassini-Huygens mission is a cooperative project of NASA, the European Space Agency and the Italian Space Agency. JPL, a division of the California Institute of Technology in Pasadena, manages the Cassini mission for NASA's Science Mission Directorate, Washington, D.C. JPL designed, developed and assembled the Cassini orbiter.