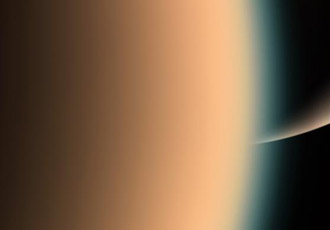 Image right: Cassini peers around the hazy limb of Titan to spy the sunlit south pole of Saturn in the distance beyond. Image credit: NASA/JPL/Space Science Institute

Scientists analyzing data gathered by the Cassini spacecraft have confirmed the presence of heavy negative ions in the upper regions of Titan's atmosphere. These particles may act as organic building blocks for even more complicated molecules. Their discovery was completely unexpected. The findings are published in the Nov. 28 issue of Geophysical Research Letters.