Cassini Mission to Saturn Celebrates 10 Years Since Launch
Celebrating the 10th anniversary of its launch from Cape Canaveral, the Cassini-Huygens mission to Saturn is once again at the center of scientific attention. Its latest discoveries about the ringed planet are a leading topic of conversation among the nearly 1,500 scientists gathered this week at a major astronomy conference in Orlando, Fla.

Cassini rode into space Oct. 15, 1997, atop a U.S. Air Force Titan IVB. Its mission: to orbit and study the Saturnian system for four years and to put the European Space Agency's Huygens Probe in position to parachute down to the frozen surface of Saturn's Earthlike moon Titan. Since entering orbit around Saturn, Cassini's scientific instruments, powered by radioisotope thermoelectric generators, have returned immense amounts of new information via NASA's global Deep Space Network to the international team of scientists working on the mission. 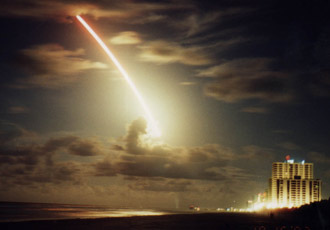 Image right: This picture of the Cassini launch was taken by Ken Sturgill of Marion, Virginia.
+ Larger view

Scientists aren't the only ones to benefit from Cassini's voyage of discovery. Since arriving at Saturn three-and-a-half years ago, Cassini's revelations have captured the public imagination. Its spectacular views of Saturn and its realm have graced the covers of magazines around the world. Millions have followed the mission's progress at NASA's web sites http://www.nasa.gov/cassini and http://saturn.jpl.nasa.gov .

"Orbiting Saturn, Cassini is in the middle of the greatest natural laboratory accessible to us in space," says Matson. "With its rings, dozens of moons and magnetic environment, Saturn is like a mini-solar system, with Saturn as a stand-in for the sun, and the moons and rings like planets in formation. Through Cassini and its instruments, we are making fundamental strides in understanding the physical processes that created and govern this and other solar systems."

Some of the discoveries include ice geysers shooting from Saturn's moon Enceladus and the finding that one of Saturn's rings is created from these ice particles. Recently, scientists found that material from Enceladus is also affecting the rotation of Saturn's magnetic field. And an onboard radar instrument, which sees through clouds, has been unveiling the fascinating world of Titan, the large moon with complex chemistry and lakes of hydrocarbons.

More information about the Cassini mission is available at http://www.nasa.gov/cassini and http://saturn.jpl.nasa.gov .