Saturn Turns 60
Scientists have recently discovered that the planet Saturn is turning 60 - not years, but moons.

"We detected the 60th moon orbiting Saturn using the Cassini spacecraft's powerful wide-angle camera," said Carl Murray, a Cassini imaging team scientist from Queen Mary, University of London. "I was looking at images of the region near the Saturnian moons Methone and Pallene and something caught my eye." 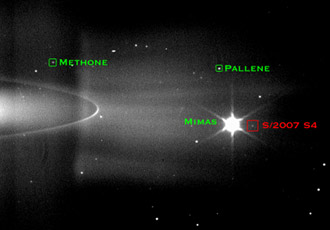 The newly discovered moon first appeared as a very faint dot in a series of images Cassini took of the Saturnian ring system on May 30 of this year. After the initial detection, Murray and fellow Cassini imaging scientists played interplanetary detective, searching for clues of the new moon in the voluminous library of Cassini images to date.

The Cassini imaging team's legwork paid off. They were able to locate numerous additional detections, spanning from June 2004 to June 2007. "With these new data sets we were able to establish a good orbit for the new moon,” said Murray. "Knowing where the moons are at all times is important to the Cassini mission for several reasons."

One of the most important reasons for Cassini to chronicle these previously unknown space rocks is so the spacecraft itself does not run into them. Another reason is each discovery helps provide a better understanding about how Saturn's ring system and all its billions upon billions of parts work and interact together. Finally, a discovery of a moon is important because with this new knowledge, the Cassini mission planners and science team can plan to perform science experiments during future observations if and when the opportunity presents itself.

What of this new, 60th discovered moon of Saturn? Cassini scientists believe "Frank" (the working name for the moon until another, perhaps, more appropriate one is found) is about 1.2 miles (2 kilometers) wide and, like so many of its neighbors, is made mostly of ice and rock. The moon's location in the Saturnian sky is between the orbits of Methone and Pallene. It is the fifth moon discovered by the Cassini imaging team.

"When the Cassini mission launched back in 1997, we knew of only 18 moons orbiting Saturn," said Murray. "Now, between Earth-based telescopes and Cassini we have more than tripled that number - and each and every new discovery adds another piece to the puzzle and becomes another new world to explore."

Murray and his colleagues may get the chance to explore Saturn's 60th moon. The Cassini spacecraft's trajectory will put it within 7,300 miles (11,700 kilometers) in December of 2009.

The Cassini-Huygens mission is a cooperative project of NASA, the European Space Agency and the Italian Space Agency. NASA's Jet Propulsion Laboratory, a division of the California Institute of Technology in Pasadena, Calif., manages the Cassini-Huygens mission for NASA's Science Mission Directorate, Washington, D.C. The Cassini orbiter and its two onboard cameras were designed, developed and assembled at JPL. The imaging team is based at the Space Science Institute, Boulder, Colo.