Titan's mysterious radio wave
Huygens scored a first in 2005 by measuring the electrical conductivity of Titan's atmosphere. The results hint at a new way to investigate the subsurface layers of Titan and could provide insight into whether or not Titan has a subsurface ocean.

The Permittivity, Waves and Altimetry (PWA) sensor on the Huygens Atmosphere Structure Instrument (HASI) detected an extremely low frequency (ELF) radio wave during the descent. It was oscillating very slowly for a radio wave, just 36 times a second, and increased slightly in frequency as the probe reached lower altitudes. 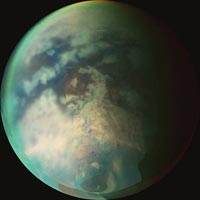 If the PWA team confirms that the signal is a natural phenomenon and not an artefact of the way the instrument worked, they will have discovered a powerful new way to probe not just the atmosphere of Titan but its subsurface as well.

The only other world on which ELF waves were detected before was Earth. They are reflected by both the surface of the Earth and its ionosphere, the rarefied region of the atmosphere where most particles are electrically charged. This turns the atmosphere into a giant 'sound box' where certain frequencies of ELF waves resonate and are reinforced, whilst other die away.

On Titan, however, the surface is a poor reflector because of its low conductivity and so these waves penetrate the interior. "The wave could have been reflected by the liquid-ice boundary of a subsurface ocean of water and ammonia predicted by theoretical models," says Fernando Simões, CETP/IPSL-CNRS, France, and a member of the PWA team.

If Simões is right, successful modelling of how ELF waves resonate on Titan could lend support to the ocean's existence and tell scientists about the depth at which it sits. Understanding the resonance however, is difficult.

Above about 100 kilometres altitude on Earth, the ionosphere provides the upper reflecting layer of the resonating cavity. At Titan, PWA revealed that things are more complicated. Apart from the ionosphere, at a much higher altitude of about 1200 kilometres, Huygens found a layer of ionized particles consisting of electrons, at 63 kilometres. "This does not match any previous prediction for Titan," says Simões. To some extent, it splits Titan's atmosphere into two resonating chambers.

With so much at stake, the PWA team are checking to make sure the detection is real and not an artefact generated by the spacecraft. They have already ruled out electrical interference from the instrument itself.

Two small arms, one on either side of Huygens, create an antenna and the team's next goal is to investigate whether the arms could have oscillated during the descent. Simões and colleagues are building a special chamber to hold a replica of the instrument at the low temperature of Titan's atmosphere, between 100-200 degrees Kelvin (about -173 to -73 °C), in order to check whether the antenna resonates at 36 hertz. If it does, it probably means that the signal is an artefact. If it does not, confidence in the signal's reality will increase and the investigation of the atmosphere and subsurface can begin.

But perhaps the biggest mystery is what generated the ELF wave in the first place. On Earth, they are initiated by lightning strikes that make electrons in the atmosphere oscillate, releasing the ELF waves.

The PWA was designed to search for ELF waves on Titan while a microphone on Huygens kept an ear out for thunder – a sure sign of lightning. Cassini has also been watching for lightning using its cameras.

However, Huygens suggests that there is no lightning, or very little. "If there is lightning on Titan, it is significantly less than the amount of lightning that Earth experiences," says Simões. So what generated Titan's ELF? No one is quite sure yet. "It might be generated by an interaction with Saturn's magnetosphere or related to Titan's intrinsic fields," suggests Simões. "Titan is proving to be an intriguing environment."

One thing is certain: there is plenty to investigate. "The measurement of atmospheric electricity is something really new and exciting," says Jean-Pierre Lebreton, ESA Huygens Project Scientist. "We could send similar instruments to study atmospheric electricity on other celestial bodies, in particular Venus, Mars, and the giant planets," adds Simões.

The PWA team expect to release more definitive results when their investigation is complete.

This article is based on two papers that will appear in a special issue of the Planetary and Space Science magazine dedicated to Huygens results: 'Electron conductivity and density profiles derived from the Mutual Impendence Probe measurements performed during the descent of Huygens through the atmosphere of Titan', by M.Hamelin et al., and 'A new numerical model for the simulation of ELF wave propagation and the computation of eigenmodes in the atmosphere of Titan: did Huygens observe any Schumann Resonance?', by F. Simões et al.

Cassini-Huygens is a joint mission between NASA, ESA and the Italian Space Agency (ASI).