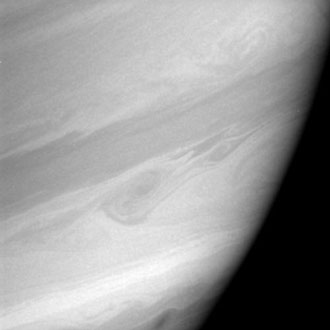 On Saturn, it may be a very long wait for the calm after a storm. As big and destructive as hurricanes on Earth can be, at least they don't last long. Not like those on Saturn, where storms may rage for months or years. Viewed from space, hurricanes on Earth and the huge atmospheric disturbances observed on Saturn look similar. But their differences are greater and offer intriguing insights into the inner workings of the ringed world being investigated by scientists on NASA's Cassini mission.

Earth's hurricanes and Saturn's storms each have swirling clouds, convection, rain and strong rotating winds. "Hurricanes on Earth are low pressure centers at the ground and high pressures at the top where the storms flatten out," says Dr. Andrew Ingersoll, member of the Cassini imaging team and professor of planetary science at the California Institute of Technology in Pasadena, Calif.  "Storms on Saturn could be like hurricanes if what we're seeing is the top of the clouds."

The frequency of storms on Saturn seems to be about the same as on Earth, and the fraction of planet occupied by storms is also similar. Not surprisingly, since Saturn is so much larger than Earth -- nine Earths would fit across its equator--its storms are bigger. Hurricane Katrina stretched more than 380 kilometers (240 miles) across, for example, while two storms the Cassini spacecraft spotted in February 2002 each extend more than 1,000 kilometers (620 miles) in diameter, about the size of Texas or France. 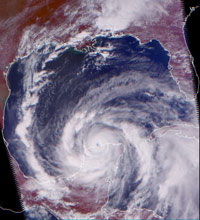 On Earth, hurricane winds can exceed 240 kilometers per hour (150 miles per hour), similar to the speed of the jet stream, just about the fastest wind on the planet. Though spinning furiously, hurricanes travel along at a much slower pace -- eight to 32 kilometers per hour (five to 20 miles per hour). Saturn is different because its jet stream is much stronger. "Saturn's a very windy place," says Ingersoll. "The jet stream on Saturn blows ten times faster than on Earth, up to a thousand miles per hour." Saturn's winds are like conveyor belts between which storms appear to roll like ball bearings, he explains. "While we don't know the wind speeds within the storms, a good guess is that they are slower than the winds in the jet stream."

What most distinguish storms on Saturn from those on Earth are the forces that drive them and physical differences between the two planets.

The heat that drives hurricanes on Earth comes from the oceans, vast reservoirs of solar energy. The oceans are also the source of moisture for convection, which draws energy from the ocean into the atmosphere and creates storm clouds and driving rainfall. Hurricanes quickly fade once they make landfall, once the plug is pulled on their power source.

The fuel for Saturn's storms is quite different. The interior of the planet acts like an ocean and stores energy, but the energy does not come from the sun. "Saturn makes it own heat, which it got when the pieces that made the planet crashed together during the violent history of the early solar system," says Ingersoll. 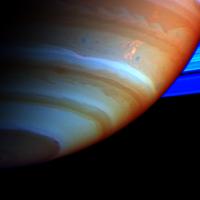 Saturn's atmosphere has all the ingredients necessary for hurricane-like storms including heat and water vapor, he continues, so there's no need for that first step in hurricane development where the ocean evaporates. And, without a solid surface like Earth's ocean, Saturn's storms behave very differently.

"You'd think that when two storms merge, for example, that you'd get a bigger storm," says Ingersoll, "but they seem to stay the same size. They can also split apart. They may go on forever, merging and splitting."

Scientists will be able to study Saturn's storms more closely next year, when the Cassini spacecraft tours a region in the southern hemisphere mission scientists that call storm alley.

With the exception of a few storms, like the dramatic Dragon Storm observed by the Cassini spacecraft last year, most of Saturn's storms are unnamed, unlike those on Earth. That may change, says Ingersoll, when scientists get to know them better.