Cassini Scientist for a Day 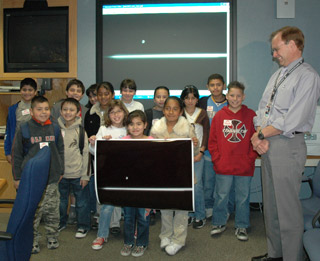 Picking a target for a spacecraft to observe is usually a task for a select group of mission scientists. This fall, however, a group of California third, fourth and fifth graders got to put themselves in the scientists' place and select where to point Cassini's cameras as the spacecraft continues its historic tour of the Saturnian region.

"There is no reason why the scientists on this project ought to have all the fun in designing these observations," says Robert T. Mitchell, program manager for the Cassini-Huygens mission at JPL.

The students were given 10 days to study three target options and decide which opportunity would make more sense scientifically. After a lively debate, they voted to take an image of the majestic rings. Mission planners then calculated the needed maneuvers and sent the commands to the spacecraft. The image was taken Jan. 23, 2006.

The students who got to step into Cassini scientists' shoes attend Shirley Avenue Elementary School in Reseda, California, part of the NASA Explorer School network. The school was selected to pilot this educational program that challenges students to experience first-hand the kind of decisions scientists make on a daily bases. In February, a similar activity will be open to all 150 NASA Explorer schools.

The participating students were already familiar with Saturn. They have been studying Reading, Writing and Rings for a year and a half, a language arts and science curriculum centered on the Saturnian system. 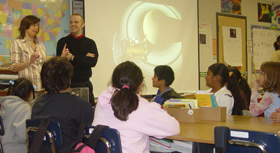 When it came time to make their image choice, the students responded with a spirited discussion. They examined the scientific values of each of the three best shots and, with a vote of 11 to one, chose to take an image of the rings.

"We chose the rings because we had a lot of questions about them," says Angelica, 9 years old. "We want to know everything about the rings."

Sheer beauty played a part too.

"Reading, Writing and Rings helped my students visualize the distances and complexity of the Saturnian system," says Kathy Cooper, the class teacher. "Until then, they had this perception that everything was close to us. The curriculum brought a new perspective to them." 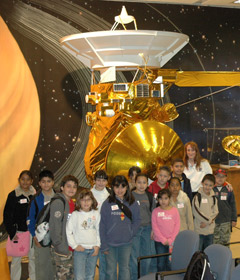 The "Cassini Scientist for a Day" activity helped the students understand how much time it takes to gather scientific information and how complicated it is to make decisions.

Image right: The students and their teacher, Kathy Cooper, in front of a half-scale model of the Cassini spacecraft at JPL. Credit: NASA

"I was stunned to hear a fourth grader saying, 'You need a good eye and have to be patient because science isn't quick -- we didn't learn about the universe overnight, it takes time,'" Cooper says. "The activity brought a higher level of thinking; they kept coming up with good questions."

"We generally design a few more images for optical navigation purposes than are absolutely necessary because we don't always get all of them," Mitchell explains. "We've been having excellent performance ever since we got into orbit at Saturn, so to free up some small number of these images for this kind of purpose was something we were able to do with no cost, and no impact to the mission."

Such educational activities could inspire the next generation of space explorers.

"If we can give this opportunity to the future generation of scientists and engineers, to give them a chance to see just how the process works, to stimulate their excitement and enthusiasm for this kind of activity, then that's a nice bonus," Mitchell says.