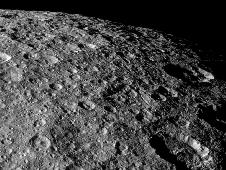 Cassini looks over the heavily cratered surface of Rhea during the spacecraft's flyby of the moon on March 10, 2012. Image credit: NASA/JPL-Caltech/Space Science Institute
› Full image and caption

NASA's Cassini spacecraft will be swooping close to Saturn's moon Rhea on Saturday, March 9, the last close flyby of Rhea in Cassini's mission. The primary purpose will be to probe the internal structure of the moon by measuring the gravitational pull of Rhea against the spacecraft's steady radio link to NASA's Deep Space Network here on Earth. The results will help scientists understand whether the moon is homogeneous all the way through or whether it has differentiated into the layers of core, mantle and crust.

In addition, Cassini's imaging cameras will take ultraviolet, infrared and visible-light data from Rhea's surface. The cosmic dust analyzer will try to detect any dusty debris flying off the surface from tiny meteoroid bombardments to further scientists' understanding of the rate at which "foreign" objects are raining into the Saturn system.

On Feb. 10, 2015, Cassini will pass Rhea at about 29,000 miles (47,000 kilometers), but this is not considered a targeted flyby. Cassini has been in orbit around Saturn since 2004 and is in a second mission extension, known as the Solstice mission.

The Cassini-Huygens mission is a cooperative project of NASA, the European Space Agency and the Italian Space Agency. NASA's Jet Propulsion Laboratory manages the mission for NASA's Science Mission Directorate, Washington, D.C. JPL is a division of Caltech. For more information on Cassini, visit http://www.nasa.gov/cassini and http://saturn.jpl.nasa.gov .