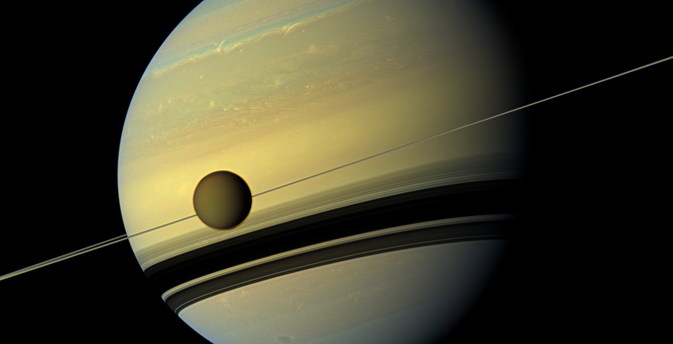 A giant of a moon appears before a giant of a planet undergoing seasonal changes in this natural color view of Titan and Saturn from NASA's Cassini spacecraft. Image credit: NASA/JPL-Caltech/SSI › Full image and caption 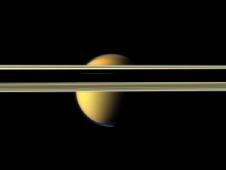 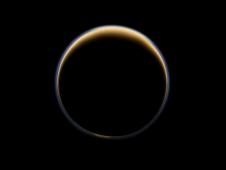 NASA's Cassini spacecraft looks toward the night side of Saturn's largest moon and sees sunlight scattering through the periphery of Titan's atmosphere and forming a ring of color. Image credit: NASA/JPL-Caltech/SSI
› Full image and caption 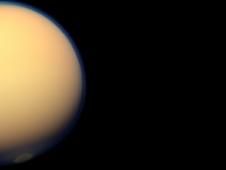 PASADENA, Calif. -- Posing for portraits for NASA's Cassini spacecraft, Saturn and its largest moon, Titan, show spectacular colors in a quartet of images being released today. One image captures the changing hues of Saturn's northern and southern hemispheres as they pass from one season to the next.

A wide-angle view in today's package captures Titan passing in front of Saturn, as well as the planet's changing colors. Upon Cassini's arrival at Saturn eight years ago, Saturn's northern winter hemisphere was an azure blue. Now that winter is encroaching on the planet's southern hemisphere and summer on the north, the color scheme is reversing: blue is tinting the southern atmosphere and is fading from the north.

The other three images depict the newly discovered south polar vortex in the atmosphere of Titan, reported recently by Cassini scientists. Cassini's visible-light cameras have seen a concentration of yellowish haze in the detached haze layer at the south pole of Titan since at least March 27. Cassini's visual and infrared mapping spectrometer spotted the massing of clouds around the south pole as early as May 22 in infrared wavelengths. After a June 27 flyby of the moon, Cassini released a dramatic image and movie showing the vortex rotating faster than the moon's rotation period. The four images being released today were acquired in May, June and July of 2012.

Some of these views, such as those of the polar vortex, are only possible because Cassini's newly inclined -- or tilted -- orbits allow more direct viewing of the polar regions of Saturn and its moons.

Scientists are looking forward to seeing more of the same -- new phenomena like Titan's south polar vortex and changes wrought by the passage of time and seasons -- during the remainder of Cassini's mission.

"Cassini has been in orbit now for the last eight years, and despite the fact that we can't know exactly what the next five years will show us, we can be certain that whatever it is will be wondrous," said Carolyn Porco, imaging team lead based at the Space Science Institute in Boulder, Colo.

Launched in 1997, Cassini went into orbit around Saturn on July 1, 2004. It is in its second mission extension, known as the Solstice Mission, and one of its main goals is to analyze seasonal changes in the Saturn system.

"It is so fantastic to experience, through the instruments of Cassini, seasonal changes in the Saturn system," said Amanda Hendrix, deputy project scientist, based at NASA's Jet Propulsion Laboratory in Pasadena, Calif. "Some of the changes we see in the data are completely unexpected, while some occur like clockwork on a seasonal timescale. It's an exciting time to be at Saturn."

The Cassini-Huygens mission is a cooperative project of NASA, the European Space Agency and the Italian Space Agency. JPL, a division of the California Institute of Technology in Pasadena, manages the Cassini-Huygens mission for NASA's Science Mission Directorate, Washington. The Cassini orbiter and its two onboard cameras were designed, developed and assembled at JPL. The imaging team is based at the Space Science Institute in Boulder, Colo.