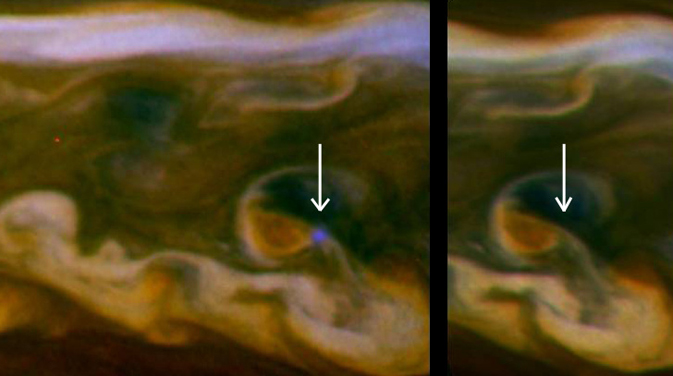 These false color mosaics from NASA's Cassini spacecraft capture lightning striking within the huge storm that encircled Saturn's northern hemisphere for much of 2011. Image Credit: NASA/JPL-Caltech/SSI
› Full image and caption

PASADENA, Calif. – Saturn was playing the lightning storm blues. NASA’s Cassini spacecraft has captured images of last year’s storm on Saturn, the largest storm seen up-close at the planet, with bluish spots in the middle of swirling clouds. Those bluish spots indicate flashes of lightning and mark the first time scientists have detected lightning in visible wavelengths on the side of Saturn illuminated by the sun.

“We didn’t think we’d see lightning on Saturn’s day side – only its night side,” said Ulyana Dyudina, a Cassini imaging team associate based at the California Institute of Technology in Pasadena. “The fact that Cassini was able to detect the lightning means that it was very intense.” Images can be found at http://www.nasa.gov/cassini, http://saturn.jpl.nasa.gov and http://ciclops.org. The storm occurred last year. The lightning flashes appear brightest in the blue filter of Cassini’s imaging camera on March 6, 2011. Scientists aggressively heightened the blue tint of the image to determine its size and location. Scientists are still analyzing why the blue filter catches the lightning. It might be that the lightning really is blue, or it might be that the short exposure of the camera in the blue filter makes the short-lived lightning easier to see.What scientists do know is that the intensity of the flash is comparable to the strongest flashes on Earth. The visible energy alone is estimated to be about 3 billion watts lasting for one second. The flash is approximately 100 miles (200 kilometers) in diameter when it exits the tops of the clouds. From this, scientists deduce that the lightning bolts originate in the clouds deeper down in Saturn’s atmosphere where water droplets freeze. This is analogous to where lightning is created in Earth’s atmosphere.In composite images that show the band of the storm wrapping all the way around Saturn, scientists have seen multiple flashes. In one composite image, they recorded five flashes, and in another, three flashes.“As summer storm season descends upon Earth’s northern latitudes, Cassini provides us a great opportunity to see how weather plays out at different places in our solar system,” said Linda Spilker, Cassini project scientist, based at NASA’s Jet Propulsion Laboratory, Pasadena, Calif. “Saturn’s atmosphere has been changing over the eight years Cassini has been at Saturn, and we can’t wait to see what happens next.” The Cassini-Huygens mission is a cooperative project of NASA, the European Space Agency and the Italian Space Agency. JPL, a division of the California Institute of Technology in Pasadena, manages the Cassini-Huygens mission for NASA's Science Mission Directorate, Washington. The Cassini orbiter and its two onboard cameras were designed, developed and assembled at JPL. The imaging team is based at the Space Science Institute in Boulder, Colo. Media contact:
Jia-Rui C. Cook 818-354-0850
Jet Propulsion Laboratory, Pasadena, Calif.
jia-rui.c.cook@jpl.nasa.gov