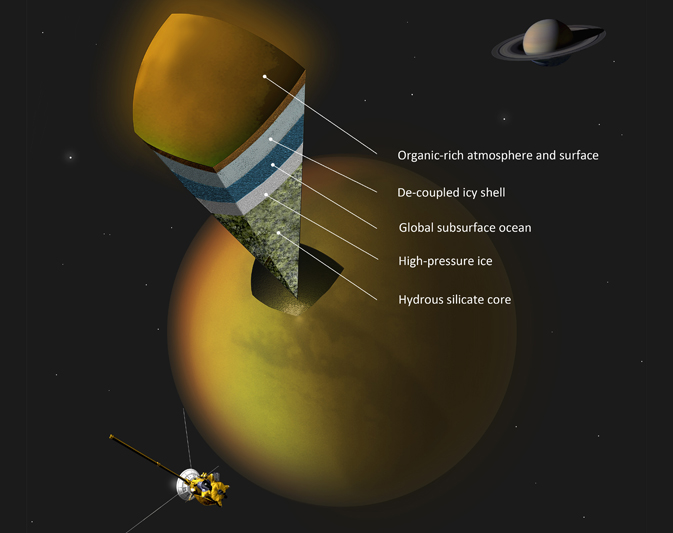 This artist's concept shows a possible scenario for the internal structure of Titan, as suggested by data from NASA's Cassini spacecraft. Image credit: A. Tavani › Full image and caption    › Related animation 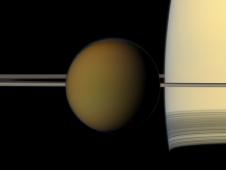 The colorful globe of Saturn's largest moon, Titan, passes in front of the planet and its rings in this true color snapshot from NASA's Cassini spacecraft. Image credit: NASA/JPL-Caltech/Space Science Institute
› Full image and caption

Researchers saw a large amount of squeezing and stretching as the moon orbited Saturn. They deduced that if Titan were composed entirely of stiff rock, the gravitational attraction of Saturn would cause bulges, or solid "tides," on the moon only 3 feet (1 meter) in height. Spacecraft data show Saturn creates solid tides approximately 30 feet (10 meters) in height, which suggests Titan is not made entirely of solid rocky material. The finding appears in today's edition of the journal Science.

"Cassini's detection of large tides on Titan leads to the almost inescapable conclusion that there is a hidden ocean at depth," said Luciano Iess, the paper's lead author and a Cassini team member at the Sapienza University of Rome, Italy. "The search for water is an important goal in solar system exploration, and now we've spotted another place where it is abundant."

Titan takes only 16 days to orbit Saturn, and scientists were able to study the moon's shape at different parts of its orbit. Because Titan is not spherical, but slightly elongated like a football, its long axis grew when it was closer to Saturn. Eight days later, when Titan was farther from Saturn, it became less elongated and more nearly round. Cassini measured the gravitational effect of that squeeze and pull.

Scientists were not sure Cassini would be able to detect the bulges caused by Saturn's pull on Titan. By studying six close flybys of Titan from Feb. 27, 2006, to Feb. 18, 2011, researchers were able to determine the moon's internal structure by measuring variations in the gravitational pull of Titan using data returned to NASA's Deep Space Network (DSN).

"We were making ultrasensitive measurements, and thankfully Cassini and the DSN were able to maintain a very stable link," said Sami Asmar, a Cassini team member at NASA's Jet Propulsion Laboratory in Pasadena, Calif. "The tides on Titan pulled up by Saturn aren't huge compared to the pull the biggest planet, Jupiter, has on some of its moons. But, short of being able to drill on Titan's surface, the gravity measurements provide the best data we have of Titan's internal structure."

An ocean layer does not have to be huge or deep to create these tides. A liquid layer between the external, deformable shell and a solid mantle would enable Titan to bulge and compress as it orbits Saturn. Because Titan's surface is mostly made of water ice, which is abundant in moons of the outer solar system, scientists infer Titan's ocean is likely mostly liquid water.

On Earth, tides result from the gravitational attraction of the moon and sun pulling on our surface oceans. In the open oceans, those can be as high as two feet (60 centimeters). While water is easier to move, the gravitational pulling by the sun and moon also causes Earth's crust to bulge in solid tides of about 20 inches (50 centimeters).

The presence of a subsurface layer of liquid water at Titan is not itself an indicator for life. Scientists think life is more likely to arise when liquid water is in contact with rock, and these measurements cannot tell whether the ocean bottom is made up of rock or ice. The results have a bigger implication for the mystery of methane replenishment on Titan.

"The presence of a liquid water layer in Titan is important because we want to understand how methane is stored in Titan's interior and how it may outgas to the surface," said Jonathan Lunine, a Cassini team member at Cornell University, Ithaca, N.Y. "This is important because everything that is unique about Titan derives from the presence of abundant methane, yet the methane in the atmosphere is unstable and will be destroyed on geologically short timescales."

A liquid water ocean, "salted" with ammonia, could produce buoyant ammonia-water liquids that bubble up through the crust and liberate methane from the ice. Such an ocean could serve also as a deep reservoir for storing methane.

The Cassini-Huygens mission is a cooperative project of NASA, the European Space Agency and the Italian Space Agency. The mission is managed by JPL for NASA's Science Mission Directorate in Washington. DSN, also managed by JPL, is an international network of antennas that supports interplanetary spacecraft missions and radio and radar astronomy observations for the exploration of the solar system and the universe. The network also supports selected Earth-orbiting missions. Cassini's radio science team is based at Wellesley College in Massachusetts. JPL is a division of the California Institute of Technology in Pasadena.