This raw, unprocessed image was taken by NASA's Cassini spacecraft on May 20, 2012. The camera was pointing toward Methone. Image credit: NASA/JPL-Caltech/SSI     › Larger view 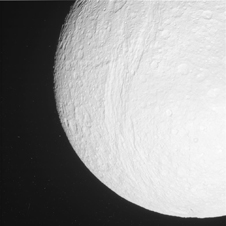 This raw, unprocessed image was taken by NASA's Cassini spacecraft on May 20, 2012. The camera was pointing toward Tethys at approximately 81,580 miles (131,290 kilometers) away. Image credit: NASA/JPL-Caltech/SSI
› Full image and caption
› Tethys image gallery 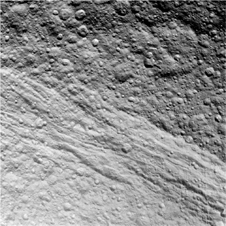 This raw, unprocessed image was taken by NASA's Cassini spacecraft on May 20, 2012. The camera was pointing toward Tethys at approximately 37,196 miles (59,861 kilometers) away. Image credit: NASA/JPL-Caltech/SSI
› Full image and caption

NASA's Cassini spacecraft made its closest approach to Saturn's tiny moon Methone as part of a trajectory that will take it on a close flyby of another of Saturn's moons, Titan. The Titan flyby will put the spacecraft in an orbit around Saturn that is inclined, or tilted, relative to the plane of the planet's equator. The flyby of Methone took place on May 20 at a distance of about 1,200 miles (1,900 kilometers). It was Cassini's closest flyby of the 2-mile-wide (3-kilometer-wide) moon. The best previous Cassini images were taken on June 8, 2005, at a distance of about 140,000 miles (225,000 kilometers), and they barely resolved this object.

Cassini's encounter with Titan, Saturn's largest moon, on May 22, is the first of a sequence of flybys that will put the spacecraft into an inclined orbit. At closest approach, Cassini will fly within about 593 miles (955 kilometers) of the surface of the hazy Titan. The flyby will angle Cassini's path around Saturn by about 16 degrees out of the equatorial plane, which is the same plane in which Saturn's rings and most of its moons reside.

Cassini's onboard thrusters don't have the capability to place the spacecraft into orbits so inclined. But mission designers have planned trajectories that take advantage of the gravitational force exerted by Titan to boost Cassini into inclined orbits. Over the next few months, Cassini will use several flybys of Titan to change the angle of its inclination, building one on top of the other until Cassini is orbiting Saturn at around 62 degrees relative to the equatorial plane in 2013. Cassini hasn't flown in orbits this inclined since 2008, when it orbited at an angle of 74 degrees.

This set of inclined orbits is expected to provide spectacular views of the rings and poles of Saturn. Further studies of Saturn's other moons will have to wait until around 2015, when Cassini returns to an equatorial orbit.

"Getting Cassini into these inclined orbits is going to require the same level of navigation accuracy that the team has delivered in the past, because each of these Titan flybys has to stay right on the money," said Robert Mitchell, Cassini program manager at NASA's Jet Propulsion Laboratory, Pasadena, Calif. "However, with nearly eight years of experience to rely on, there's no doubt about their ability to pull this off."

Cassini discovered Methone and two other small moons, Pallene and Anthe, between the orbits of Mimas and Enceladus between 2004 and 2007. The three tiny moons, called the Alkyonides group, are embedded in Saturn's E ring, and their surfaces are sprayed by ice particles originating from the jets of water ice, water vapor and organic compounds emanating from the south polar area of Enceladus.

The Cassini-Huygens mission is a cooperative project of NASA, the European Space Agency and the Italian Space Agency. JPL manages the mission for the agency's Science Mission Directorate in Washington. The California Institute of Technology in Pasadena manages JPL for NASA.

For more information on the Cassini mission, visit: http://www.nasa.gov/cassini and http://saturn.jpl.nasa.gov .