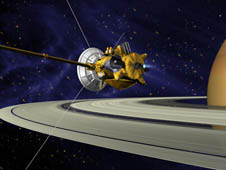 PASADENA, Calif. -- Engineers with NASA's Cassini mission are conducting diagnostic testing on a part of the spacecraft's radio system after its signal was not detected on Earth during a tracking pass in late December. The spacecraft has been communicating with Earth using a backup part.

The issue occurred with the ultra-stable oscillator, which is used for one type of radio science experiment and also as a means of sending data back to Earth. The spacecraft is currently using an auxiliary oscillator, whose frequency stability is adequate for transmitting data from the spacecraft to Earth. Tests later this month will help mission managers decide whether it will be possible to bring the ultra-stable oscillator back into service.

Some of the data collected for the radio science experiment using the auxiliary oscillator will be of lesser quality than that from the ultra-stable oscillator. Signals used for occultation experiments – where scientists analyze how radio signals are affected as they travel through Saturn's rings or the atmospheres of Saturn and its moons back to Earth – will be of lesser quality. A second kind of radio science investigation using gravity measurements to probe the internal structure of Saturn or its moons will not be affected. Cassini carries 12 science experiments.

The cause is still under investigation, but age may be a factor. The spacecraft launched in 1997 and has orbited Saturn since 2004. Cassini completed its prime mission in 2008 and has had two additional mission extensions. This is the first time its ultra-stable oscillator has had an issue.

The Cassini-Huygens mission is a cooperative project of NASA, the European Space Agency and the Italian Space Agency. NASA's Jet Propulsion Laboratory in Pasadena manages the mission for the agency's Science Mission Directorate in Washington.