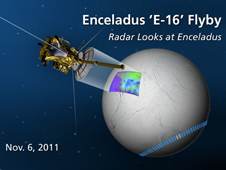 NASA's Cassini spacecraft will acquire the first detailed radar images of Saturn's moon Enceladus during a flyby on Sunday, Nov. 6. These will be the first high-resolution radar observations made of an icy moon other than Titan. The results will provide new information about the surface of Enceladus and enable researchers to compare its geological features as seen by radar with those of Titan.

The spacecraft will fly past Enceladus at a distance of about 300 miles (500 kilometers) at its closest point. During the encounter, Cassini's synthetic aperture radar will sweep across a long, narrow swath of the surface just north of the moon's south pole. Cassini will use other radar techniques to map much more of the surface of Enceladus at lower resolutions and determine some of the surface's physical properties as the spacecraft approaches and then speeds away from the icy body.

During this flyby, the mission's visible-light cameras will take images of Enceladus and its famous jets, and the composite infrared spectrometer will make new measurements of hot spots from which the jets emerge. Cassini's ultraviolet imaging spectrograph will also make distant observations of Saturn's moon Dione and its environment.

The Cassini-Huygens mission is a cooperative project of NASA, the European Space Agency and the Italian Space Agency. NASA's Jet Propulsion Laboratory, a division of the California Institute of Technology in Pasadena, manages the mission for NASA's Science Mission Directorate in Washington. The Cassini orbiter and its two onboard cameras were designed, developed and assembled at JPL.