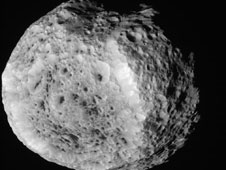 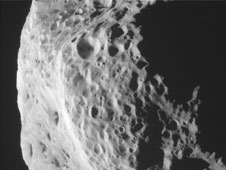 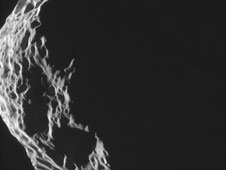 Closeup view of Hyperion taken by NASA's Cassini spacecraft. Image credit: NASA/JPL-Caltech/Space Science Institute
› Larger image NASA's Cassini spacecraft captured new views of Saturn's oddly shaped moon Hyperion during its encounter with this cratered body on Thursday, Aug. 25. Raw images were acquired as the spacecraft flew past the moon at a distance of about 15,500 miles (25,000 kilometers), making this the second closest encounter.

Hyperion is a small moon -- just 168 miles (270 kilometers) across. It has an irregular shape and surface appearance, and it rotates chaotically as it tumbles along in orbit. This odd rotation prevented scientists from predicting exactly what terrain the spacecraft's cameras would image during this flyby.

However, this flyby's closeness has likely allowed Cassini's cameras to map new territory. At the very least, it will help scientists improve color measurements of the moon. It will also help them determine how the moon's brightness changes as lighting and viewing conditions change, which can provide insight into the texture of the surface. The color measurements provide additional information about different materials on the moon's deeply pitted surface.

The latest raw images of Hyperion are online at: http://saturn.jpl.nasa.gov/photos/raw/ .

Cassini's closest encounter with Hyperion was on September 26, 2005, when the spacecraft flew approximately 310 miles (500 kilometers) above the moon's surface.
Cassini's next flyby of Hyperion will be on Sept. 16, 2011, when it passes the tumbling moon at a distance of about 36,000 miles (58,000 kilometers).